Been watching the O'Reilly factor now for years.  Always liked O'Reilly.  He just was the kind of guy that was obviously sincere and cared about things the way we were all did.  After finding out that he grew up only a few blocks from me in Westbury, N.Y., it made me like him even more.   Then a few years back, he started changing.  The change was apparent to all I knew and also started showing up in the emails that he reads at the end of his show.  The change in my view was that he had become obsessed with 'fair and balanced'. 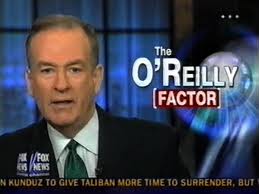 [1]Fox's 'fair and balanced is a noble and certainly a welcomed, if not necessary goal of any news organization.  But like many good ideas, it sounds good but in today's reality, it is not.

Let me introduce a point that needs to be considered here;  What happens when you consider a lie but do not know that it's a lie?  Yes, through no fault of yours, the lie now has the credibility and the impact of the truth.  In today's reality, this fair and balanced notion does not work for this reason.  Now if a Michael Savage or a Joyce Kaufman were on Fox, then the lie would be exposed in no uncertain terms.  They would do the responsible thing for their viewers and come right out and label it a lie and the person a liar.  Now both the person and the lie are exposed and any credibility they had is gone and the argument now can be considered honestly.  But in the 'interest' of fair and balanced, Fox and especially O'Reilly dismiss the notion that a lie and the liar should be labeled.  (Once in a while he does get passionate and exposes the liar for what they are, but this is now very rare on his show.)   They consider the lie 'the persons point of view and therefor deserves equal time.

Starting to see the problem?  Here's a question that will provide the answer.  What is more important to you when you read the news or better yet, what is more important to the success and progress of civilized society;   'Fair and Balanced'  OR  'Right and Wrong'?    Don't get me wrong here.  I have no argument with those who promote fair and balanced as long as the 'fair' is included and that means exposing the lies for what they are.  But when lies and liars are given the same air time and credibility as the truth, then fair and balance 'itself' has no credibility.

Of course some will say that 'how do you know when the person is being honest or not.  Easy answer, does the facts support what he is saying or not.  And herein lies 'the great divide'.  Simply put, is it an opinion or is it based on facts.  Opinions are fine and everyone should and does have one.  But quite frankly, when it comes to life and death situations, who gives a damn about an opinion whether it's yours or mine?

Example, Racial Profiling.  The facts are that it is an essential tool whether it be for criminals or Muslim terrorists.  And if it is effective that means that it can save my life and your life and the lives of our families.  So then why the hell should we entertain anyone's opinion on it?   Don't give a damn if they 'think' it's unconstitutional or not.  THIS IS NOT A COLLEGE DEBATE where one team wins.  This is a LIFE AND DEATH REALITY and EVERYONE'S life is at stake.  But of course the other reality is that most liberals have little concern for you or your family's security.

The liberal's ideology/opinion is tantamount and everything they support, be it with their vote, their money, their time, and their conversation is exclusively focused on this opinion.  The realities and the facts are irrelevant.  Right and wrong are irrelevant.  Common sense and the truth are irrelevant.  And most importantly, your safety and that of even civilized society, is irrelevant if it conflicts with the way THEY see things!   If you want to see this first hand, just watch most debates between a liberal and any other person.  As soon as one starts to counter the liberals opinion with history or the facts, the liberal will cut in and try to drown out the truth.

Personally, I will not waste my time debating a liberal unless they agree that the debate be based on known facts and the history of the subject matter.   No use debating opinions because there are millions of them and so be it.    But there is only one set of facts and no one yet has been able to go back and change history.  So next time you're about to debate a liberal try it.  Before you begin, just ask if he wants to talk opinion or facts.  Any answer other than 'the facts', means he's only interested espousing his opinion and not in any debate on the subject.

This brings us back to Fox and 'The No Spin Zone'.  As the ratings indicate, Fox is indeed America's most watched and trusted cable news outlet.  And 'fair and balanced' is an admirable objective.  But once again this old tried and true statement comes to mind;  "Too much of anything is no good".

So how about it Bill?  Which will it be;  fair and balanced or right and wrong?