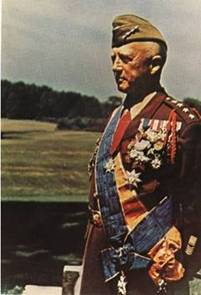 Poor General Patton.  Just can’t rest in peace.  1st Vietnam, then the Gulf War, and now the war on Islam.  The atrocities of war without the victories that they are fought for.   All those young brave American soldiers dying, all the 100s of billions of dollars wasted.  No peace treaties,  just lives destroyed and arguments from an ungrateful world.  Along comes the war on Islam (please spare me the PC  BS about ‘the war on terror’).  First after butchering 3ooo Americans in the name of Allah their God, the American President insists that Islam is a ‘religion of peace’.   Then one of the highest ranking generals, General Colin Powell endorses a Muslim lawyer with no military service or experience for the office of President over a true war hero.   (So muck for MLK’s “content of character not color of skin dream”)  And now comes our latest excuse for a general, David Petraeus.  All the way from the ‘battlefield’ in Afghanistan he finds time to chime in on an insignificant action by an insignificant pastor of an insignificant church in Florida: 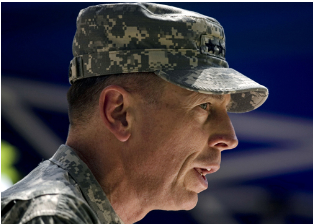 [2]AP:  “Yesterday, Petraeus warned in an e-mail to The Associated Press that the burning would be used by extremists in Afghanistan and elsewhere ‘to inflame public opinion and incite violence.”

So this ‘General’ is worried that the Muslims might “incite violence'”  if some Pastor burns Korans!  I guess then this Pastor must have been burning Korans for the last 1400 years!  And please someone ask the ‘General’ what the hell our brave guys are over there for.  They have suicidal ‘rules of engagement’ and now they hear that their ‘General’  doesn’t want to make the enemy mad!!    No wonder why Afghanistan is now America’s longest war.  There’s no F__king General in charge and now we have a Muslim as his boss who has ordered not to offend the enemy by calling them terrorists!!    (God I can’t wait till this Twilight Zone episode is over!  It just seems to go on and on and on without even a break for commercial…)

Patton answered to Eisenhower, a real General with real military training and experience. Four years after the attack on Pearl harbor the enemy surrendered and the Peace Treaty was signed on board The USS Missouri in Tokyo Bay.

Petraeus answers to Obama.  An ex lawyer with Muslim roots and radical associates who despises the influence and successes of America’s military.  Eight years after the attack in New York and Washington, our brave soldiers are still fighting and dieing and there is no end in site.  And the report from the battlefield; ‘the General is afraid to incite violence from  the enemy’.

Shame on these bastards that are sacrificing the lives of these great young Americans.

Shame on these bastards that are coddling this subhuman enemy.

Shame on these bastards that allow the enemy to thrive providing them with more tolerance than they give to our own soldiers.

Shame on these bastards that give refuge and constitutional rights to an enemy that has sworn to conquer America and kill all those who defy them.

Shame on these bastards that allow the enemy to build monuments of conquest overlooking what remains of 3000 innocent Americans who did no more than go to work that morning.

Shame on these bastards for allowing the enemy to hide behind a veil of religion while killing Christians and Jews all over the world for 1400 years.

These bastards are a disgrace;  to this nation, to all those who have fought and died for it, to the memory of the innocent victims all over the world and to every good person with any decency.   We need to get rid of these weak stupid bastards.  Our lives and our children’s future depend on it.

We need real leaders and real Generals or else get your prayer carpets ready..

Where Have All The Generals Gone? [5]