It is 'beyond belief' how this "800 pound elephant in the room"  is totally ignored and overlooked 24/7 in all of the media!   I mean think about it.  These media 'pundits' talk day and night, 7 days a week about politics and the 'cancer' that is destroying America BUT NOT ANY MENTION about the ' Tumor ' that is causing the cancer!!  And it's as simple as 8th grade algebra;  only when you discover the common denominator will you be able to solve  the multiple problems.  I challenge anyone to review all of Americas' serious problems and issues of today and find the common denominator.  Go ahead.  The economy, the wars, national security, the legal system, the 'Supreme Court', Congress, the Presidency.  The last few give it away.  that's right:  LAWYERS. 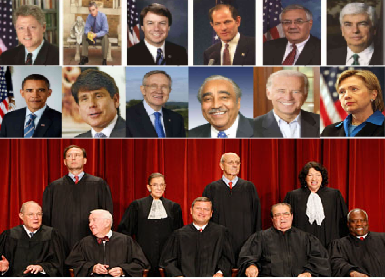 You can call them anything you like. Call them Republicans, Democrats, Progressives, Independents, Politicians, Judges, Congressman, Senators, Legislators, Public Servants, etc.   But the one fact and common denominator remains; they are all (with few exceptions) LAWYERS!
Whether you agree or disagree, like it or not, the numbers are real and the facts are the facts.   Anyway you do the math America is now ruled 100% by LAWYERS!

Lawyers now have total control of all the branches of both the State and the Federal governments.  And through these branches, they are in control of the economy, the military, national security, social security, your business, your health care, what you say and how you say it, the food you eat, the toys your children play with, and on and on and on…  Why is it that we have allowed this group with absolutely no business experience to run the biggest business in the world?

They are the common denominator and they are the 'tumor' that has spread the cancer over America for at least the  last 4 decades.   Lawyers now have total control of all the branches of both the State and the Federal governments.   There can be no separation of powers when one privileged group controls all of the branches of government.

So why is it that this 800 pound elephant is not only not seen, but rarely even mentioned! 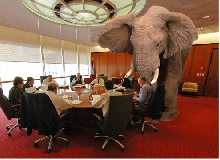 [3]
First of all most of the American media are ideological puppets.  Just turn the channel and you will see how creatively challenged these people are.  Often I wonder why thay just don't all merge into one channel and save all the overhead.   It appears as though they just watch each other and keep duplicating everything.  No out of the box thinking.  No original thought.  No  creative thinking.  I could go back 40 years and hear the same opinions and reviews of the elections or the two  parties and their candidates.  The media has become as mundane and empty as the politicians they cover;  same old stuff over and over again.

Secondly, Lawyers have much in common with Islam.  They have managed to hide their true colors and identity.  Islam hides behind a false cloak of religion and the lawyers hide behind the many labels they have created for themselves;  Republicans, Democrats, Progressives, Independents, Politicians, Judges, Congressman, Senators, Legislators, Public Servants, etc.   All of these titles sound respectable.  Take away the title and what do you have, lawyers.    And we all know how respectable they are…

Finally, lawyers have managed to take control because the electorate is lazy and uninformed.  They know more about Lebron James than they do about the man running for President of the United States.   Until those who vote become educated about their Republic and the candidates, this inept and unqualified privileged class will be able to maintain their power and control.

Like with Islam, America needs to wake up.  Whereas Islam is the enemy at the gates, Lawyers are the enemy within.   And like Islam, the problem cannot be solved unless and until it is identified  and exposed for all to see.

So how about it America?  How about it media?  It's an 800 pound elephant.  If you refuse to see it then you are destined to pay the price.  And Americas future is an awful price to pay for your blindness…

WHY IS OUR GOVERNMENT and OUR COUNTRY BEING RUN BY AN EMPOWERED, PRIVILEGED, AND UNETHICAL GROUP OF PEOPLE THAT TOGETHER REPRESENT  THE LEAST RESPECTED PROFESSIONS in AMERICA ??!!

We Can Get Our Culture and Our Country Back
We Can Restore The Character, The Class, and
The Glory That is
The United States of America

Join the 2nd Revolution at