In a previous post we determined that “gays” are indeed SOBs and not your everyday SOB that we like to label our ‘not so favorite people’  as.  (See ‘Same Sex Marriage, Are You Serious? [1])

This issue is second only to abortion.  Both issues take direct aim at the foundation of America which is of course the Judeo Christian model of civilized society.  Without this foundation, there can be no ‘civilized’ society in America or anywhere else.

This of course means nothing to the proponents of these issues because they neither have nor want any morals.   But these poor SOBs are in the end part of the human race and therefore are subject to the laws and mores of Mother Nature.  And it is in direct defiance of Mother Nature to kill a baby or to embrace and indeed promote having  sex with the same gender.

We all know Mother Nature’s purpose of sex and understand why she made it so pleasurable.   To abuse this pleasure and indeed defy it’s purpose, is unacceptable to any decent person and to the future of man.

Sorry SOBs, that’s just the way it is and after millions of years of human evolution, you’re not going to change it.

And so these SOBs have been on a mission for decades.  The mission is to force acceptance of their queer lifestyle on each and every one of us.  It is the only way they can minimize the natural guilt in-bedded in their genes by Mother Nature.

Here’s a must read for all those who want to restore ‘The Class, The Character, and The Glory that is The United States of America 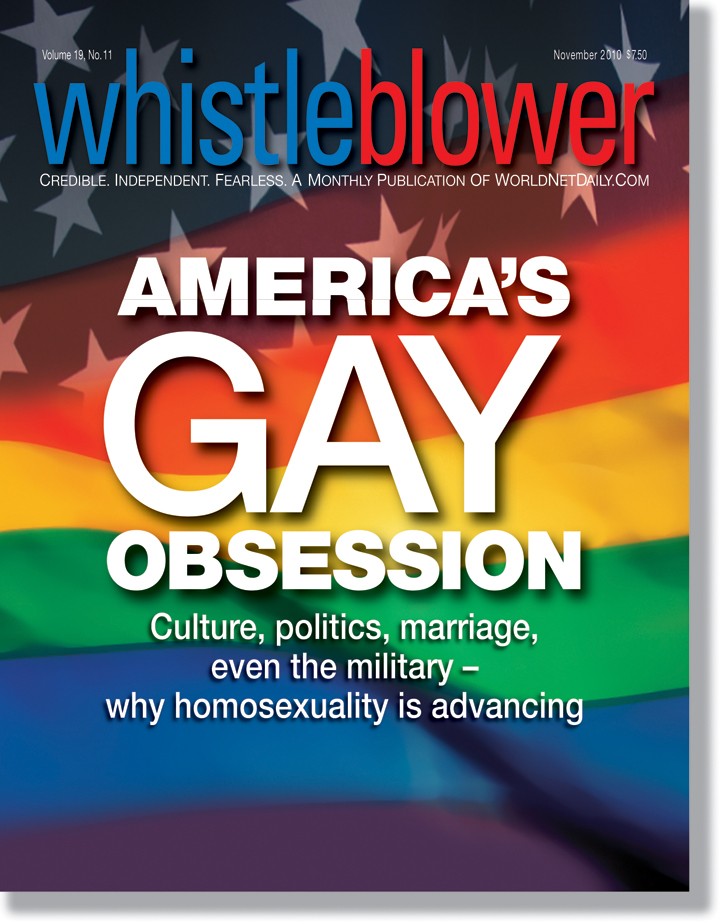 Culture, politics, marriage, even the military – why homosexuality is rapidly advancing

Posted at Whistleblower Magazine on November 01, 2010

For the past two decades, the powerful “gay rights” lobby has been crusading tirelessly to promote special legal rights for homosexuals, indoctrinate the nation’s schoolchildren with their worldview, radically redefine the institution of marriage, repeal the U.S. military’s time-tested rules of conduct, intimidate and discredit any and all critics, and – perhaps worst of all – criminalize and punish the open expression of Judeo-Christian moral beliefs.

This highly coordinated effort, once extremely controversial but today basically greenlighted by politicians and the press – including key conservatives – is rapidly advancing toward total victory, after which any return to Christian morality in American law and culture will become almost impossible.  …..

Despite recent shocking news reports – like the CDC’s revelation that 1 in 5 homosexual males in the U.S. is infected with HIV/AIDS [3] and new studies proving children raised by same-sex parents are far more likely to commit homosexual acts themselves [4] than other kids – the radical “gay rights” agenda, including same-sex marriage and open homosexuality throughout the armed forces, is about to be forced down Americans’ throats.

Ironically, despite the almost total capitulation of America’s elite class on this agenda – including the news media and pundits both left and right – Americans themselves overwhelmingly reject it.

“We all better care, because once gay marriage is legalized in America – something for which there’s no precedent in 5,000 years of Western Civilization – schools will be required to indoctrinate children that homosexuality is perfectly normal and healthy, pastors and rabbis will fear preaching their faith’s core moral values, gender confusion and gross immorality will dominate our culture, polygamy and other bizarre ‘marriage’ arrangements will be legalized, and much more – in short, America will become unrecognizable, regardless of who’s president and which party is in power.”