Can you imagine ANYONE saying this about his own daughters?  Of course it is beyond the human imagination to actually KILL your own children, but then again we're talking here about a sub-human; more commonly known as a Muslim.  A  Muslim, (as differentiated from a MINO or 'Muslim In Name Only [1]')  is a person who follows the teachings of Mohamed and follows the edicts of the Koran; a book written by Mohamed under the pseudonym of Allah.

The 'father' and 'mother' and 'brother' in this horrific story did not originate 'honor killing.'  Nor did they originate the thought process that would produce such unbelievable words such as these.  In fact it is totally against all natural human and even animal instincts to do and say what this Muslim did.  These types of inhumane actions and mindsets can only be produced by a complete indoctrination and brainwashing of someone.  And this is what Islam does and has been doing for 1400 years.  Hard to believe unless of course you actually read the Koran and study the history of Islam.  Or if you don't have time for all that, just take a quick look at

[2]Anyone who would ever give Islam the 'benefit of the doubt' need only to read these words to erase all doubt forever about 'the diarrhea of civilization' known as Islam:

“May the devil s— on their graves,”

Mohammad Shafia told his second wife, Tooba Mohammad Yahya, 20 days after the bodies of the couple’s three teenage daughters and Mr. Shafia’s first wife were recovered from a car in the water at the locks.

“May the devil s— on their graves,”  These words should be the Headline on every newspaper in the world.  They should be the 'Breaking News' story on every news channel and every radio talk show and internet blog.  In a sane world void of suicidal ignorance and 'politically correct' speech, they would be.

So if you have any more doubt or questions about Islam, just remember this picture of these 3 sisters and the words spoken from their Muslim 'father' after he killed them: 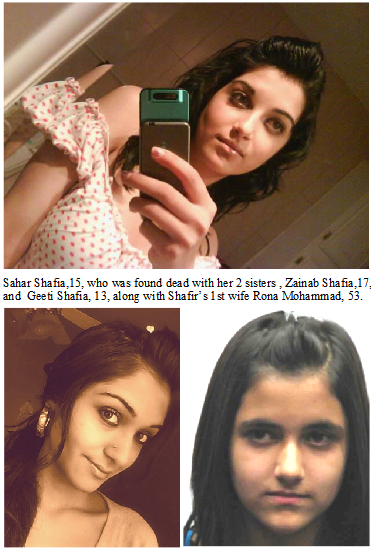 “May the devil s— on their graves”

Father accused in multiple honor killings says "Were they to come to life, I would do it again"

KINGSTON, Ont. — It’s the Canadian Maple Leaf that flies high over the picturesque locks at Kingston Mills near this historic city, but on the night of June 30, 2009, it might just as well have been the black-red-and-green flag of Afghanistan, with its sacred line proclaiming the greatness of Allah.