Ah the good old days.  When a black man could be strung up based totally on an allegation, no trial needed.  'Happy times are here again' for the KKK and for the scum of American politics.

Shame on the NAACP and the Black community.  Shame on the disgraceful American media and especially Fox News for playing along.  Shame on the Democrats.  Shame on the Republicans.  Shame on the whores who accepted the '30 pieces of gold' for their 15 minutes of fame.  And finally, shame on Herman Cain for allowing them all to put the noose around his neck without a fight. 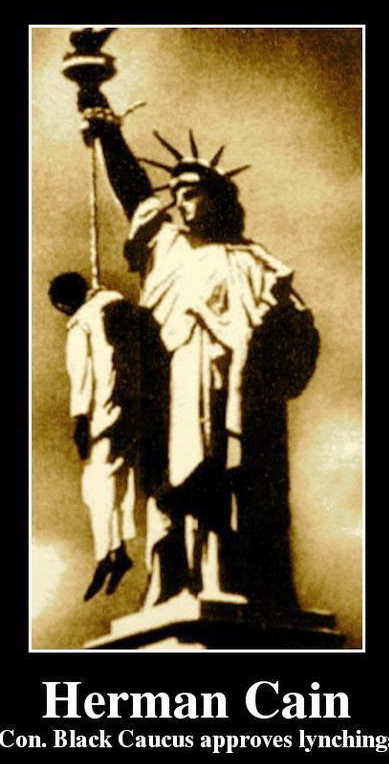 [1]So much shame to go around in this one.  Even the American people share in the shame for permitting their media to partake in this all out attack on black man who achieved the American dream and was such a great example for his community, a community that is in shambles because of the same detractors that arranged this man's high tech lynching.

And Herman Cain.  Another 'good guy' who is doomed to lose 'the game' because he only plays defense.  The results for Mr. Cain were in as soon as he said that the charges were false.  Of course they were but by him saying it did no good and only fueled this despicable fire that the bad guys can light up any time they want. 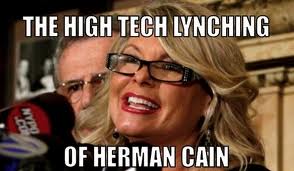 [2]No Herman, in this game when the opposing team goes on offense you hit so hard that they fumble the ball right into your hands.   Only with ball in hand can you score and win.  So here's the game plan and lesson for all that will be dooped into this suckers game in the future;

When they come out and accuse you of anything you hit right back with an accusation of your own.  Don't worry if it's true or ridiculous, they didn't!  In fact the more ridiculous and unsubstantiated it is, the more it makes their accusation look the same.  Get it?

Let's look at 2 extreme examples although pretty much anything is on the table in this 'war' for the minds of the electorate.

1) Frankly if I were Herman Cain and someone told me that 'someone ' had made an accusation of sexual harassment my reply would be that "Well I don't understand.  Before this interview you slapped me in the ass and told me you liked my tight butt.  Why did you do that?  Isn't that also what you are accusing me of ?"

2) If an interviewer asked for my response to an allegation of an affair I would immediately say to this media person 'that even if this lie were true,  it is still not near as bad as the accusation by the animal rights people that you abuse your dog when you have sex with it!

You can see not only how it makes the accusation look ridiculous and unsubstantiated, but it also puts the interviewer and/or accuser on the defensive as you wait for their answer which, (like Cain's denial and the truth) doesn't matter now that 'the cats out of the bag.'

And now that you have showed that you know their game plan and will use it against them, guess what; game over.