In the real world, when someone is so bad at their job that it causes the company to lose money, they are fired.  Pretty simple; no debate needed.

Yes, lawyers, because they dominate the judiciary and indeed the government, have made themselves immune to responsibility and punishment.  Be it in private practice, as judges or as politicians, they are allowed to fail, and fail miserably, with impunity.  We're talking not just poor performance here.  We're talking not just a one time mistake which cost the company profits.  No, when it comes to lawyers, they can make mistakes that cost billions, even TRILLIONS of dollars to the people they work for.  And as if that's not enough, they can make mistakes that cause people to die.

And so we come to Hillary Clinton. (How much longer do we have to bare the disgrace and failures of the Clintons?  Isn't over 20 years enough?) 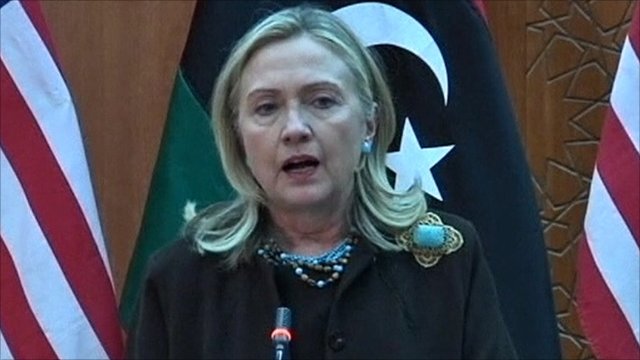 [1]Hillary Clinton stands before the Islamic flag in  support of the new Islamic regimes in Egypt and Libya.  She actually bragged about her support saying: " We came, we saw, he died" in referring to Muammar Gaddafi, Libya's slain leader.

Hillary Clinton holds the title of Secretary of State.  One of the highest positions in government.  The pay, benefits and perks are beyond what any average person could dream of.  Her main responsibility at this job is as follows:

The Secretary of State, and by extension, the Chief of Mission, are responsible for developing and implementing security policies and programs that provide for the protection of all U.S. Government personnel (including accompanying dependents) on official duty abroad.  (1) [2]

On September 11, 2012, embassies in Egypt and Libya came under attack.  Both embassies were in countries where the enemy threat is at it's highest.  Any average citizen knows this.  And it is customary to beef up security at these places especially on 9/11.

Not only did Hillary Clinton fail at her job, her failure is considered 'criminal negligence: Criminal negligence refers to a mental state of disregarding known or obvious risks to human life and safety. 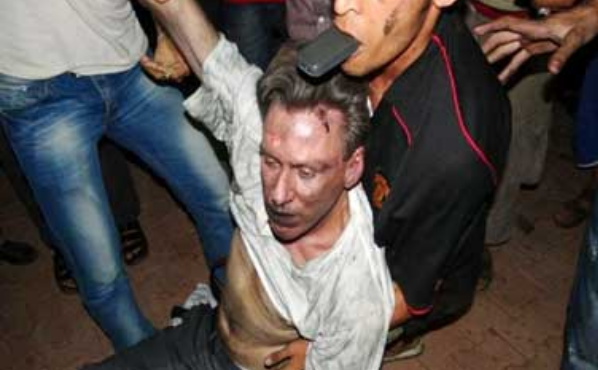 [3]U.S. ambassador to Libya J. Christopher Stevens and three other embassy staff killed and paraded through the streets of Libya in celebration…  read more [4]

Four people, including the US Ambassador, were killed at the Libyan Embassy.  At the Egyptian embassy the flag was burned and property destroyed.  Both criminal attacks were preplanned which means The State Department, with all the intelligence and information it is privy to, had to be 'asleep at the wheel.'

And just to show how stupid and out of touch lawyers are when it comes to leadership, here is what Hillary Clinton said after word came of these disasters:  "I ask myself, how could this happen?"

Here's the story and as usual omits the real reason for so many failures in 'our' government. 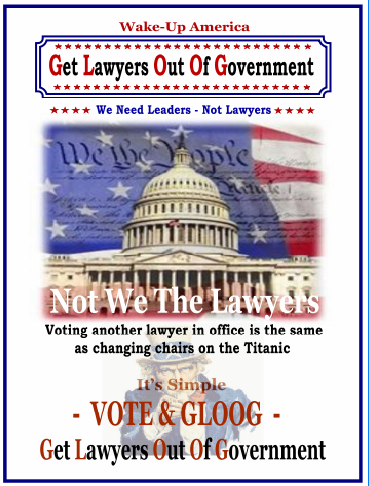 Today, speaking about the despicable and stomach-wrenching attacks by Islamists on our consulate in Benghazi, Libya, and our embassy in Cairo, Secretary of State Hillary Clinton asked: “How could this happen in a country we helped liberate, in a city we helped save from destruction?”

That single line is the most damning indictment of Hillary Clinton’s State Department that could ever be penned. It demonstrates her complete lack of knowledge about the region, her failure to anticipate security threats, and worst of all, her willful ignorance about the Islamists that she and President Obama trusted to take over Libya and Egypt.

Quoting senior diplomatic sources, the paper reports, “the US State Department had credible information 48 hours before mobs charged the consulate in Benghazi, and the embassy in Cairo, that American missions may be targeted.” Nonetheless, “no warnings were given for diplomats to go on high alert and ‘lockdown,’ under which movement is severely restricted.”

Why wasn’t there better protection at the consulate? Because that’s the way Secretary of State Clinton wanted it; the State Department posted no Marines to the consulate. It was staffed instead by those Libyan “security” forces. The consulate also had “no bulletproof glass, reinforced doors or other features common to embassies.”

Have Americans had enough yet of Hillary Clinton being placed on a phony pedestal as the political star who would beat any presidential candidate, were she only to agree to run? How is it that Mrs. Clinton continually polls as a most desirable and trustworthy leader?

Have Hillary Clinton’s lies about the murders of our ambassador and other diplomats in Libya finally underscored for Americans that this woman is as much a part of government corruption as the corrupt men to whom she attaches herself?