Full disclosure:  I have no respect for Michele Obama.  First and foremost when she said that “For the First Time in My Adult Lifetime, I’m Really Proud of My Country”, that sealed the deal to anyone who loves America and it’s proud history.  Secondly I firmly believe that ‘birds of a feather flock together.’  And with her husband being what he is [1] and doing what he does, well you get the point.

So first she was inspired by her husband, a man with no qualifications getting elected because his father was black, and now she’s inspired by a homosexual exposing his need for perversions to the world.  Wow. This ‘lady’s’ got one hell of a level of esteem to meet to get her impressed…

We all know that Barack Obama has many titles; none of which are very flattering for a President, especially one who thinks so much of himself.  But now his wife too has replaced her original title of ‘First Lady’ (which was arguable from the beginning) with a new one which best describes this ungrateful, anti-American _____.

Since she feels so compelled to congratulate queers on exposing their perverted lifestyle, while of course little if any of her time is spent honoring our troops or the families that sacrificed for America,  since she hosted a party for homosexuals in The White House [2]that shamed the American Presidency and  since a ‘lady’ does not expose her perversions in public, perhaps she can be officially known as the ‘First Perverted Lady’ or something similar that may be more in line with her character and ‘cultural concerns’… 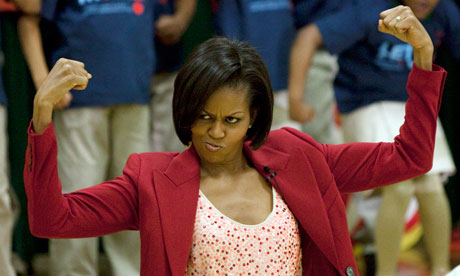 [3]So congratulations once again to the Obama’s.  The accolades keep rolling in….

WASHINGTON (AP) – Michelle Obama says a gay University of Missouri football player is “an inspiration to all of us.”

The first lady took to Twitter on Monday to comment on Michael Sam, the all-American college player who announced Sunday that he is gay. Mrs. Obama says she “couldn’t be prouder” of Sam’s courage, both on and off the field.

The tweet was signed “-mo,” which is how the White House marks messages personally sent by the first lady. …