Add another one to Rod Serling’s America [1].

So this is the answer to ‘War on Terror.’  Increase the number of Muslim immigrants, increase the number of Mosques, support the Muslim Brotherhood and last but definitely not least: elect a Muslim for president!   WOW!  Guess we showed those 9/11 terrorists and all Islamists not to mess with America…

Posted on April 22, 2014 by Snejana Farberov – A video has surfaced online showing what appears to be a pair of Transportation Security Administration officers giving two young children full-body pat-downs in a U.S. airport.
The one-and-a-half minute clip was shared by user khanzahir100 on YouTube last Friday.
In the description of the video, the man wrote that two TSA agents subjected his two-year-old son and six-year-old daughter to pat-downs because he had been selected – ‘as usual’ – for a security check due to his name.      Scroll down for video 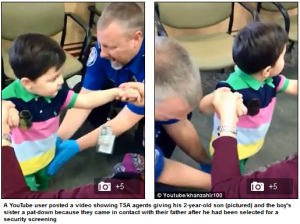 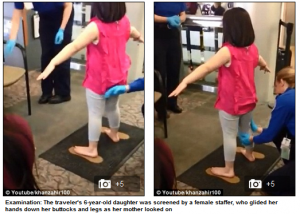 The video begins with the young boy nervously moving away from a male TSA screener as he starts to perform a full-body pat-down, gliding his gloved hands down his legs.
The clip continues with the couple’s daughter in a pink blouse and grey tights standing barefoot on a mat in front of a kneeling female staffer.
The blonde, bespectacled woman methodically feels her back with her palms, then brushes her buttocks with the back of her hand and inspects her legs. …