There’s a reason why World Net Daily is one of the top  news websites in the world.  It’s simple, it’s called ‘common sense’ and this guy Joseph Farah is a master of it in a world that’s losing it. 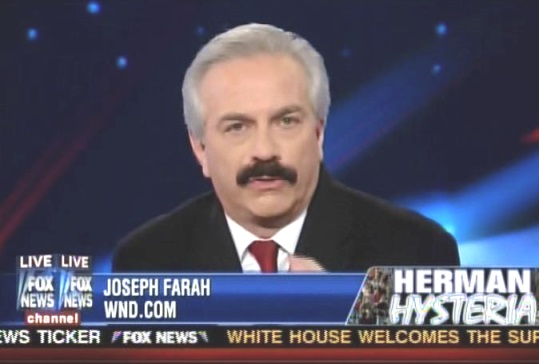 Once again Mr. Farah delivers the logic and common sense that can be ridiculed only by those who never read what he says!  This list of background information that Obama refuses to release is scary.  The only thing more scary is the lack of concern by the Congress, the media and the American people.   The list of Obama’s lies is unimaginable.  The only thing more unimaginable is that the the Congress, the media and the American people know he’s lying and yet never publicly call him out!  (Except of course that one exception to the rule, the one man in Congress with any balls: South Carolina Representative Joe Wilson. [2])

Here’s just two of the numerous articles that he published over at WND.  As usual they are short and direct.  No PC – just facts and common sense.  Joseph Farah – a real Bottom Line Guy…

Remember way back in September 2009 when Rep. Joe Wilson, R-S.C., was roundly criticized and denounced for interrupting Barack Obama’s address to a joint session of Congress with “You lie!”

He was even formally rebuked by the House of Representatives.

What got Wilson riled up back then was Obama’s promise that his signature health-care law would not cover illegal aliens.

In the big scheme of Obama’s lies, it wasn’t one of his biggest. But it was indeed a lie – just one of many concerning Obamacare. I count three bigger lies in this one statement by Obama on June 6, 2009, three months before that State of the Union Address: “If you like the plan you have, you can keep it. If you like the doctor you have, you can keep your doctor, too. The only change you’ll see are falling costs as our reforms take hold.”

Out of the mouth of Obama 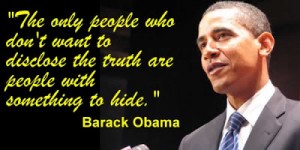 Posted by Joseph Farah at WND on September 2, 2010 – Barack Obama made this statement recently in his weekly televised address to the nation.  You can see it for yourself on the White House website.

The context in which Obama said it had to do with his notions of campaign-finance reform. As usual, he was accusing someone else of wrongdoing – in this case, and as in most cases, Republicans.

Yet it’s refreshing to hear Obama utter even one coherent sentence that is essentially true.

The trouble with this one is how it applies to him.

I’ve been saying for two years or more that when politicians hide the truth, there’s a reason for it. Obama confirmed that fact.

Now, who is it in high public office in Washington who seems most determined to hide at nearly any cost the most basic documents we would ordinarily expect to see from a president?

More than a year ago, WND reported on the extensive list of documents Obama as refused to release publicly. [6]