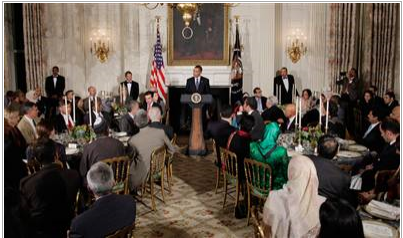 Pakistan  August 14, 2010:  Subhuman Osama Bin Laden is reported to be upset at his Muslim brother Barack Obama for not including him in the Ramadan guest list at the White House Dinner.

Washington D.C,  August 15, 2010:  Today the White House issued a statement that it would not respond to reports that key Muslims leaders were upset with the President. ???? ????? ???? ??????? [2]      Unidentified sources within the White House suggested that a secret memo was crafted personally by the President and sent to Bin Laden.  In it they said that Obama did promise Bin laden that he would be invited  at later date but his  first priority was to internally destroy America and he was confident Bin laden would understand. ?????? ???? ??????? [3]     He also wished the Muslim Leader a joyous holiday and added that  ‘Everything is going as planned thanks to the weakness and stupidity of the Americans and that he  expects to break pita with him before leaving office.    Salam Aleikum’