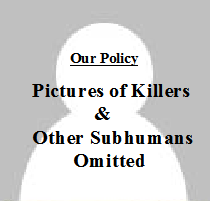 Dennis Prager has pointed out that a racist killed eight people last week and the progressive establishment expressed sympathy for the racist. Of course the racist was black and his victims were white. If you think about it for a moment this tragic incident provides  the key to understanding how progressives think and why they are in fact reactionaries — the principal supporters and abettors of racists, anti-Semites and terrorists around the world. The Palestinians and their Islamic allies have been conducting an aggressive war against the Jews of the Middle East for sixty years. Their leaders were Nazis in the 1930s and 1940s. They have revived the Hitlerian doctrine of liquidating the Jews, and are openly calling for a Second Holocaust. And the progressive left is their chief ally, apologist and supporter. Progressives inhabit an imaginary space in which whites, Jews, and Christians are demons who are guilty before the fact and Islamists and blacks are angels no matter what they do. The progressive mind is morally sick. There is no clearer example of this than the deafening silence last week over the massacre of eight people because they were white, and the sympathy of progressives for the racist who murdered them  because he was black.