Let’s play a Progressive/Liberal for a minute.  That of course means that history, reality and the facts have no consequences in arriving at the truth.    OK then Barack Hussein Obama is a Christian.

Now lets play a Traditional/Conservative wherein we use history, reality and the facts to establish the truth.    Barack Hussein Obama is now a Muslim.

How does that old saying go;

This site has dedicated a separate category to laying out the long and continuing list of evidence that leaves little doubt as to the ‘spiritual’ leanings of Barack Hussein Obama.  As mentioned before, anyone who still believes this man is a Christian needs to follow the yellow brick road back to reality.

Even more evidence that Obama is Muslim

…    There are just too many instances of Obama doing and saying things no Christian would ever dream of doing or saying, but which would be normal utterences or behaviors for a Muslim. Supposedly he’s been a Christian for what – at least 15 years? – yet his public actions consistantly dispute such a notion.

He refused to speak in the presence of a cross [spelling corrected]; it had to be hidden beneath a cloth.

In another speech he sarcastically wondered hypothetically which religious lessone might be considered to be incorporated into governing, and very snarkily cited several Old Testament battle/brimstone verses. He was clearly amused by his ridicule of Jews’ and Christians’ holy book.

His wife does not travel with him when he goes to a Muslim country [Egypt, Turkey]

He doesn’t refere to Iran as “Iran”; it’s always “the Islamic Republic of Iran”

He doesn’t refer to the Koran as “the Koran”; it’s always “the Holy Koran”

In his Cairo speech he said “I have KNOWN Islam on three continents before coming to the region where it was first REVEALED”. You can observe a religion; to “know” it, you must belong to it. And ONLY a Muslim is going to describe Islam as having been “revealed”.

In the Cairo speech he also said, “…many Muslims recognize that Israel WILL NOT GO AWAY.” That terminology would only be used by someone with a hate-Israel mindset – not by a Christian. Loyalty to Israel is part of Christian life, and is non-negotiable. Genesis 12:3

Still Cairo: “American are ready to join with citizens & governments, community orgs, religious leaders, & businesses in Muslim communities around the world to help OUR PEOPLE pursue a better life.” “Our people” – he’s including himself – can only mean Muslims as most Americans already have the best life possible.

And he said, “The Holy Koran teaches that whoever kills an innocent, it is as if he has killed all mankind, and whoever saves a person, it is as if he has saved all mankind.” His audience was Muslims, so they know “the rest of the story”, which is that this “all mankind” in the Koran refers to believing Muslims only. Jews and Christians are never referred to collectively with Muslims.

Cairo, again: “…Holy Land…a place for all of the children of Abraham to mingle peacefully together as in the story of Isra, when Moses, Jesus, and Mohammed (peace be upon them) joined in prayer.” Whoa! How come Barry the Christian is telling a story inventedd by the Muslims in an attempt to make out like Jesus and Mohammed were best buds? AQnd how come Barry the Christian is saying “peace be upon them”? For Muslims, some things are reflexive – like saying “peace be upon…” whenever they utter the name of Mohammed. Oooopsie!

Most telling is the New York Times article from several years ago, where the interviewer reported that Barry had recited the Muslim call to prayer in a “near-perfect” accent. That would be in Arabic. And that would be something Barry supposedly hadn’t heard since he’s left Indonesia 25 (appx) years before. But, but, but…he TOLD us he was never a Muslim. Oh, wait – that was before he told us he was a little bit Muslim, for a little bit. And he also told the Times’ reporter he considered the Muslim call to prayer one of the most beautiful sounds on earth.

It could be confusing – except that it’s obvious he’s been a Muslim all his life. And that he’s a liar of the first magnitude. 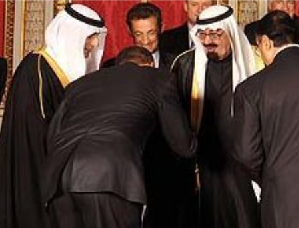