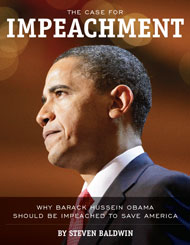 Lying, bribing, subverting election laws, payoffs, aiding the nation’s enemies, seeking the abrogation of the U.S. Constitution – which of these does not fall under the “high crimes and misdemeanors” required in the nation’s founding documents for the removal of a sitting president, asks a new special report.

“The Case for Impeachment: Why Barack Hussein Obama Should be Impeached to Save America” by Steven Baldwin covers all of these issues and more in making its arguments.

“This is the beginning of the end for the United States unless the people exercise their precious remaining liberties and stand and demand that their elected representatives impeach this president before further mortal damage is inflicted upon America,” the report concludes.

The author explains that the Founding Fathers enshrined the impeachment clause into the United States Constitution because they feared that a president intent on subverting the very principles upon which the American experiment was built would someday rise to power.