What can be said about any business that has published a warning (dictated and mandated by the Government) on its product for over 40 years yet is convicted of deceiving and misleading their customers as if the warning label never existed?!  I’ll tell you what can be said;  The tobacco companies have had the worst lawyers and PR people in the history of business and the average jury is a panel of emotional puppets easily deceived and manipulated by the lies, smoke and mirrors of greedy trial lawyers. 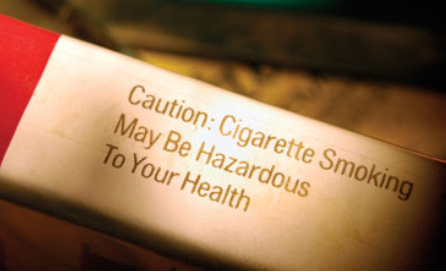 A jury Thursday ordered Big Tobacco to pay a Royal Palm Beach widow $2.2 million for enticing her husband to smoke, causing him to die of lung [2] cancer at age 55.

In addition, the jury of three men and three women found R.J. Reynolds and Philip Morris had acted recklessly by promoting cigarettes despite years of medical research that showed smoking kills. The finding sets up the nexy stage of the trial, where the same jurors will decide how much the companies should pay 60-year-old Liz Piendle in punitive damages.

The verdict came after roughly three days of deliberations following a nearly month-long trial that detailed why Charles Piendle started smoking in his teens and continued a two-pack-a-day habit for three decades before quitting seven years before his death in 1996.

The case marks the first time one of hundreds of cases pending in Palm Beach County Circuit Court, accusing tobacco companies of causing smoking-related diseases and death, has gone to trial. An estimated 8,000 similar cases are pending statewide.