You read it right.  They shut down a 7 year old’s lemonade stand.  And that’s just one of many:

In perhaps one of the most outrageous cases of regulations restricting small business, health officials in Oregon shut down 7-year-old Julie Murphy’s roadside lemonade stand in August for failing to secure a $120 “temporary restaurant” license.

Kids may also be also be getting the shaft in San Francisco where officials are launching a campaign to ban “Happy Meals” or any other meals that come with a toy. The so-called “Healthy Meals Incentive” would ban toys if the food contains too much fat, sugar or salt. It wouldn’t be the first time meal-time toys would be nixed in California; earlier this year, Santa Clara County approved an ordinance “to break the link between unhealthy food and prizes.”

Under state laws in Texas, a single piece of candy landed a 10-year-old Brazos Elementary School student in detention for a week in May.

In New York, a Brooklyn Democrat introduced a bill in the state legislature earlier this year to ban the use of salt in restaurant cooking. Read More Ridiculous Food Police Acts at: The Blaze [2]

There are two lessons that jump out here.  1.  Compromise is no longer an answer.  Look at what happened when we allowed The Bad Guys to eliminate ‘just the school prayer’.  Now they are doing all they can to eliminate our religion all together.  OK – No cigarettes in public buildings?  Now no smoking just about anywhere, including outdoors!.    OK – No profiling.  Now even our grandmothers have to undress at the airports while we provide student visas to young Islamic men.  OK – Sodomy is legal.  Now they parade naked down our streets displaying their vulgarity with no shame and no or concern about us or our children.   Etc. Etc. Etc.   Lesson Learned: ‘When you give them an inch they’ll take a mile.’  So no more inches/no more compromises.    Lesson 2:  The creation of a massive unnecessary bureaucracy has resulted in millions of government administrators, legislators, lawyers, and line level employees having no real constructive work to do.  The result is a never ending list of ridiculous rules and regulations created to keep them busy until payday.  (The Health Care Bill is a good example.  How may paid workers and how long did it take to create that 2000 page monstrosity?  Lesson Learned:  Eliminate 1/2 of all government jobs, State and Federal.  The budget will be balanced and we will no longer pay people to close down 7 year old’s lemonade stands… 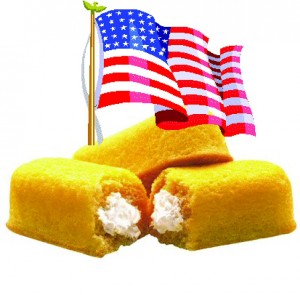 Enough is enough. It’s time that We the People take a stand against the constant barrage of Big Brother, Sunsteinesque policies and legislation that this administration keeps shoving down our throats. It’s time to let them know we’ve had enough. To that end, I am calling for all freedom loving Americans to join me this Monday, September 27, and make it Eat-a-Twinkie-for-Freedom Day.

Apparently, it is not enough for this group of Washington control freaks to tell us what to drive, what to drink, what type of light bulbs we may use, what we can use our own land for, how many vegetables we can grow, and just about every other aspect of our everyday lives. Now they feel a responsibility to control our diets, whether it be by legislation, by putting the offending products out of business, or by good, old fashioned propaganda. …