Think this could never happen in America?  Well that is exactly what the British thought just a few years ago.  That’s right.  This picture of another gross Islamic ‘tradition’ was taken in ENGLAND!

What a sick bunch of subhuman protoplasm.  This cult of Islam is beyond any doubt the most degenerate group ever assembled.  Hard to believe they are still around to walk this earth.  If only they would expedite their meeting with Allah and the 72 virgins.   We need to do all we can to help them on this journey once and for all…

Here’s another story about Islamic dementia:

“Like a scene from a horror film”: Shi’ites cut their heads for Ashura in Britain 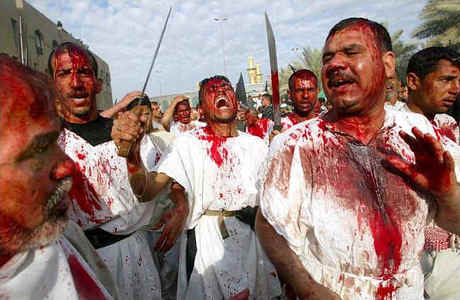 Posted by Robert Spencer on November 11,2010

If someone wants to cut his head and stalk down the street with the blood streaming down, that’s his business, I suppose. It isn’t illegal. But others are likewise free to find it unnerving, disgusting, and possibly a danger to the public health. And it is certainly a sign of an increased assertiveness on the part of Shi’ite Muslims in Britain, and a manifestation of a value system that differs radically from that held by most in the West. Islamization of Britain Update: “Muslims Cut Bodies for Faith,” by David Jarvis and Shekhar Bhatia in the Express [2], November 7 (thanks to all who sent this in):

ISLAMIC fanatics are mutilating themselves at a British mosque in a bloody ceremony carried out only yards from a busy high street.

Shia Muslims use a five-bladed chain called a Zanjeer to whip their own backs and make cuts in their foreheads with razor blades in homage to their faith.

Bare-chested men were left bleeding heavily during the ritual known as Matam – self-flagellation – which a witness described as being “like a scene from a horror film”.

The Sunday Express found that up to 800 men performed the bloody ceremony in secret at the Imamia Mosque in Forest Gate, east London, last year.

The Matam takes place during the annual Shia Ashura ceremony and commemorates the death of Husayn, a grandson of the prophet Muhammad. It is practised largely in Pakistan, Iran, Iraq and India as well as Yemen and Afghanistan but this is the first time it is known to have taken place in Britain.

Huge wooden screens were put up around the mosque to keep the event secret and prevent passers-by on busy Romford Road seeing the bloodletting.

The Sunday Express visited the mosque last week and learned that the ceremony took place last December and is due to be repeated next month. One man who witnessed the ceremony last year was so alarmed by what he saw he nearly passed out. He said: “There was blood everywhere. There were pools of blood on the ground and my clothes were splattered with blood. It was very scary.

“I was told it was part of a religious ceremony but the anti-western sentiment was clear. If the public had seen what was going on they would have reported it to the police. It was like a scene from a horror film.”…

Scotland Yard said it was aware of the annual Ashura event at the mosque but had no knowledge of the bloodletting which it said it had no power to ban.

A spokesman said: “If it is on private property and no offence is being committed this is not a matter for the police. The Ashura is an annual community event which has taken place in Newham for many years.”

Newham Council said it had no knowledge of the Matam taking place and the Ministry of Justice said self-flagellation was not an offence.