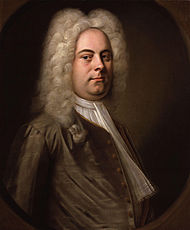 [1]There are but a few masterpieces in music. This very well could be the greatest piece of music ever written. Thank You Mr. Handel and the great Mormon Tabernacle Choir.

Composed in London during the summer of 1741 and premiered in Dublin, Ireland on 13 April 1742, it was repeatedly revised by Handel, reaching its most familiar version in the performance to benefit the Foundling Hospital in 1754. In 1789 Mozart orchestrated a German version of the work; his added woodwind parts, and the edition by Ebenezer Prout, were commonly heard until the mid-20th century and the rise of historically informed performance.

Messiah presents an interpretation of the Christian view of the Messiah, or “the anointed one” as Jesus the Christ. Divided into three parts, the libretto covers the prophecies concerning the coming of Christ, the birth, miracles, crucifixion, resurrection and ascension of Jesus, and finally the End Times with the Christ’s final victory over death and sin.  (Read More [2])