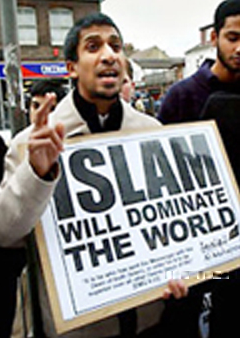 Here’s a pretty easy questions and the only prerequisite you need to get it right is just a little common sense;

The key word in question is ‘real’.   A real Muslim follows Sharia Law which flies in the face of The Constitution.  Using common sense you know that someone who is faithful to his ‘religion’ will not want to become part of a culture that is in ‘conflict’ with what he believes..    Any Christians or Jews out there want to live in Saudi Arabia?

So the obvious answer is no, real Muslims do not want to become Americans.  So then you must ask; why did  they come here then?

Anyone who understands Islam knows the answer.  But why not get it right from ‘the horses mouth’.    So here’s Nonie Darwish, a former Muslim ( see Meet Nonie Darwish – All American [2])  who came to America lived with Muslims and went to Mosques here in America.

…   Most former Muslims in the US started by going to mosques but we soon discovered a political and jihadist agenda. In mosques I was told not to assimilate in America, to have more children and to wear Islamic clothes even though I never wore it in the Middle East before coming to the US. We were encouraged to pray wherever we wanted and do that with assertion even if we have to inconvenience others at airports, baseball games or at work. We soon found out that many mosques in America, as they are in the Middle East, are more of a political organization than a place of worship. We noticed that the more pious Muslims in the mosque were the ones seeking confrontation with American culture, such as getting offended if Americans have dogs or alcohol when riding cabs with Muslim taxi drivers.

Muslims are told openly in mosques that they have a mission in America and that is to make Islam the law of the land. Lying to America and getting offended to cover up the jihadist aspiration was encouraged, and became a perfected art and a religious obligation, which further alienated Muslims from American culture.   ….

How can former Muslims live in peace in America when there are Muslim scriptures sold and bought in all mosques telling Muslims that it is OK to kill apostates, meaning those who left Islam?   The tragedy of apostasy from Islam has taken the lives of some in the West and caused mental and physical abuse for many and is never documented as a religious hate crime. Part of the jihad doctrine obliges Muslims to do internal jihad, by forcing Sharia on Muslim citizens. Sharia books in mosques across the US tell Muslims they will be forgiven for murder of an apostate and an adulterer, thus making vigilante street justice and honor killing acceptable religiously.