“Lessons for the west”  LOL  Yeh Right!  The west has been given lesson after bloody lesson for 1400 years and the result is most of them still consider Islam a religion of peace!

There are so many ‘lessons’ om a daily basis that it’s impossible to be aware of them even for sites like thereligionofpeace.com and politicalislam.com who do such in depth research and reporting.

Here we are again witnessing the ‘gratitude of Islam’ in Ethiopia.  Little media coverage, little concern and no lesson will  be learned.  But then again, they are only Christians being slaughtered – so what else is new… 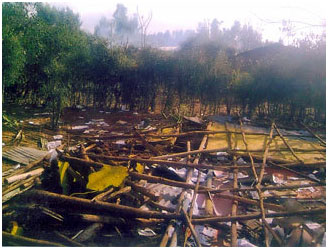 [3] Remains of one of the churches destroyed during Muslim rampage.

Muslim Jihad in Christian Ethiopia: Lessons for the West

Not only does last week’s Muslim rampage against Ethiopia’s Christians highlight the travails Christians encounter wherever Islam has a sizable population, but it offers several insights, including some which should concern faraway, secular nations with Muslim minorities. According to Fox News:

Thousands of Christians have been forced to flee their homes in Western Ethiopia after Muslim extremists set fire to roughly 50 churches and dozens of Christian homes. At least one Christian has been killed, many more have been injured and anywhere from 3,000 to 10,000 have been displaced in the attacks that began March 2 after a Christian in the community of Asendabo was accused of desecrating the Koran.   ….

Read the Complete Article at