Pam Geller.  Remember this name.  She is one of the few people who will be remembered as a 21st Century heroin when history records The War for Civilization [1].

She does it again today with this simple post and picture.  As all great women do, Ms. Geller just keeps getting better everyday.

One Picture is Worth a Thousand Blogs 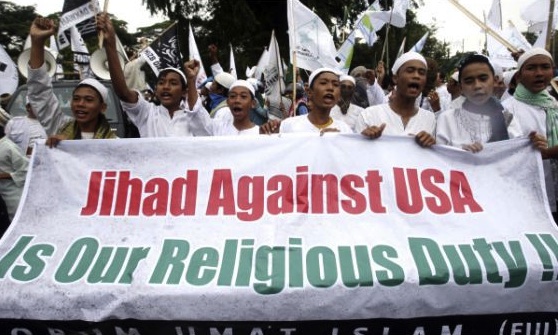 CAPTION: Indonesian Muslim protesters hold a banner during a protest against the military attack on Libya by the United States in Jakarta, Indonesia, Friday, April 1, 2011. (OC Register [3])

Thousands of blogs, books, columns, and speeches, and here these devout and pious fellas have conveyed the message better than I ever could.

I am anxious to hear all of the Islamic supremacists groups (CAIR, ISNA, ICNA, MAS, MSA, etc.) fiercely rebuke and denounce these Muslims as viciously as they denounce counter jihad fighters.