Did anyone pick up on what really happened this Wednesday?

On Wednesday, The Narcissist-in-Chief,  Barack Obama showed his contempt for the rule of law, the Constitution, and the American people.

To have refused to facilitate the Constitutional requirement of eligibility and to refuse to meet the simple demands of the American people to just prove that an American citizen is indeed holding the country’s highest office, is a slap in the face to all Americans and to the Constitution that they all adore and respect. 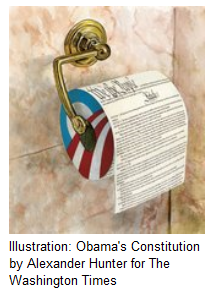 After over 2 years of making a joke out of a Constitutional requirement and  laughing at the American people and their regard for the Constitution, his attempt Wednesday to finally show the required proof was only brought on by his own political needs to settle this legal quagmire before the next election.

Obama’s arrogance and disregard for such a simple legal and logical request is proof  ‘beyond a doubt’ of his total disrespect for Americans and the Constitution, the foundation of the American Republic.  Like most lawyers, to Obama The Constitution is just another piece of paper to use as they like and when they like.

His narcissism is so over the top that it is unrecognizable to most of the country.

The MSM and the sheeple of America still refuse to recognize this man’s self serving arrogance in every move he makes.  ‘There are none so blind as those who will not see”.

But as usual there is one man who defines the topic like no other can.  He is Dr. Alan Keyes.   A man who understands America, its foundation and the Constitution.  Dr. Keyes has been blessed with a talent to speak and construct the truth that makes Obama, “the great speaker” look like a babbling buffoon who couldn’t even qualify for his high school debate team.

The liars lost – who won?

On Wednesday this week, after refusing the simple request for several years; after expending several million dollars in lawyer’s fees to battle anyone who dared pursue it; after vindictively engineering the court-martial and imprisonment of an honorable soldier who stood by his sworn oath to defend the Constitution of the United States; Barack Obama finally gave in and released what purports to be a copy of his full and complete birth certificate….

Several years of now incontrovertibly proven deceit have generated a poisonous atmosphere of distrust. It cannot be dispelled except by careful steps, intended to reassure the many score millions of Americans who must now deeply resent the studied and deliberate campaign of deception and ridicule waged against them.

But more telling than this distrust of the evidence is the inevitable distrust of Barack Obama himself. Throughout this whole controversy, I and others like me have pointed to the fact that Obama could have ended it at once by releasing the requested documentation. We rightly pointed out that, having repeatedly sworn to uphold, protect and defend the Constitution of the United States, he had the moral duty and obligation to show, and be seen to show, respect for its authority. Impressed by this obligation, what sane, responsible public official would deliberately, stubbornly refuse to do so, particularly after assuming the presidency, the office most singularly responsible for preserving the Constitution’s integrity? …

Assuming that it is what it purports to be, it provides no explanation whatsoever for Obama’s stubborn campaign to withhold it from public scrutiny. Why would a sane, responsible public official, secure in his electoral claim to the nation’s highest office, behave in a manner that resists and therefore derogates from the Constitution’s authority? Why would he contrive, or allow others to contrive, the professional ruin and imprisonment of an honorable military officer who sought only to ascertain (as his officer’s oath requires) that the orders he received came from a constitutionally lawful source of authority?…

Never before in our history has a clique of so-called leaders acted in a way that systematically questions and undermines the responsibility of all Americans – plain citizens, military officers and public officials alike – to show and be seen to show respect for the Constitution’s authority.   ….