We have seen how the 'Seeders of Destruction' (here [1]) have contributed to the moral and/or political downfall of America. Marshall, Black, Johnson, Burger are certainly the most famous of them but there are a few who will join this list of America's 'enemies within.'

Barack Obama differs from most of the seeders of destruction in that it is his ambition to willfully destroy America's exceptionalism.  And he has been doing just that for over two years now and he stands in a 'class' of his own. 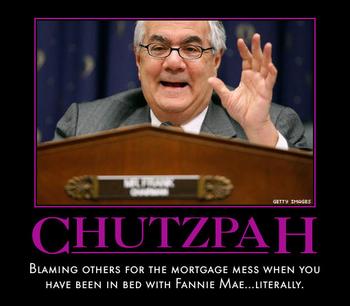 [2]Unlike Obama and like most of the others though, Barney Frank doesn't want to destroy America, he wants to change it to meet his own personal standards.  Standards that are not only threaten the existence of capitalism, but also are are in direct conflict with the Judeo-Christian heritage upon which the world's greatest nation was built.

Barney Frank is a double edged sword.  A sword that thrusts at the very heart of America's economic and moral soul.

The nation has now been in one of if not the worst and longest recessions in history thanks to the housing bust fueled by the disastrous anti-capitalistic ideologies of Frank.  Just about everyone but Frank himself agrees that his promotion and endorsement of Fanny Mae and Freddie Mac along with the nonsensical bank lending policies he forced upon the mortgage industry, led to the housing market collapse and the years of economic recession that have followed.

But as bad as the housing bubble and the economic recession is, it takes a back seat to the real underlying damage Mr. Frank has done to this country.  In this way he is very similar to Obama.  Of course we can all see the failure of the economic policies of Obama and the results on the economy and America's standing in the world.  What is not so obvious though is the tsunami that hit America on November 4, 2008.  When Barack Hussein Obama was elected President of the United States, the very backbone of the American spirit was fractured.

Hard work, experience and character were all necessary essentials if one was to realize the American Dream and for over 200 years these essentials were understood and emulated.  That is until November 4, 2008 when the greatest job on earth was given to a man who most Americans knew had none of these prerequisites.   A  populace that once clearly understood the road to success was now confused.   "Why should I work and try so hard, it doesn't matter anymore in America?"   "Let me ride the wave on someone else's back and hopefully I'll get lucky like Obama."

With Frank, the moral backbone of America has been similarly fractured.  This is a Christian nation whether one likes it or not (and most agree and like it that way, contrary to what the atheistic media wants you to believe.)   When Frank was caught having a homosexual bordello operating out of his own home and remained as a 'statesman' re-elected time and time again, what does that say about the decay of America's moral backbone?  More specifically, what does it say about the system that would allow such an immoral deviate to occupy such an important leadership position?

What it says is that the system is broken and the electorate needs to be qualified. (here [3] and here [4])   Barney Frank is a disgrace and those who voted for him should be ashamed of themselves for their total disregard and contempt for America's moral foundation.

– The following video is a real news story, it is not a preview of an upcoming Twilight Zone episode…–

Oh, did I mention that Barney Frank is a lawyer?