Just about anyone who labeled the rebellions in the Middle East 'The Arab Spring' is beyond being a jack ass.  At least jack asses know better than to go near fire once they have been burned by it.   But the experience of Iran in 1979 and the 1400 year history of the conquests and goals of Islam were never even considered by these neighbors of Dorothy, The Tin Man The Scarecrow, et al..

To say these 'experts' and media people are morons is to insult morons.  Morons may be, well morons, but at least there not that brain dead to be suicidal.

Personally, it has contributed to having that much more time to devote to my family.  Of course I never waste my time listening to a known narcissistic liar à la Clinton and Obama, but also those ideological, intellectually dishonest and mentally challenged who disregard facts and reality are also totally ignored.

(Thank God for Jim Barton and Mike Ramsay, inventors of Tivo.  Thanks to this technology, we now have in the palm of our hands, the ability to actually eliminate these idiots from our listening and TV time.  Thank You Jim and Bob for, as I refer to it, "The Jack Ass Eliminator" !  Get one and try it.  You will see how your precious time can now be better spent…)

Back to the 'Arab Spring'.

So as anyone with any common sense and half a brain realized, the Muslims are now showing the world, once again, what Islam is and what 'freedom' means to Islam.  Actually 'Muslim freedom' is an oxymoron.   Islam  means “submission to the will of God” not 'freedom' for anyone.  But lets not be bothered with history and the facts…

Here's the latest, and dare I say just the beginning, of the fruits of 'The Muslim Spring.' 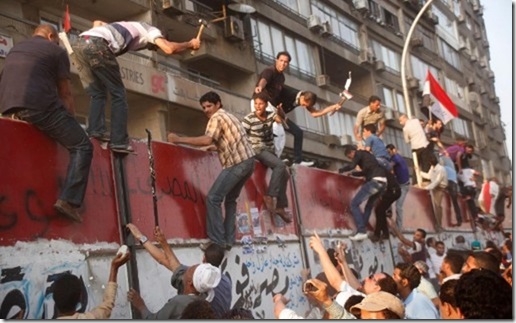 The free world stands at the precipice of catastrophic consequence.

Here again the reality of Obama's pro-Muslim Brotherhood foreign policy bears rancid, poisonous fruit. On Tuesday, the Obama supported Islamic Spring necessitated the building of a wall around the Israeli embassy in Cairo, as the cries for Jewish blood rose among the newly empowered Islamic supremacist annihilationists. The Muslim Brotherhood coup sanctioned and supported by the Obama administration has led to direct rocket attacks on Israel from Egypt (for the first time in the now fragile 30-year peace).