One of my best friends is from Palestine and he says he is a Muslim.  He attends the mosque regularly and swears his loyalty to Islam.  He is one of the nicest and most considerate guys that I ever met.  See: ' My Best Friends are Muslims??'  ( here [1])

Point at hand;  Palestinians can be great people, outside of Palestine.  But within the area they live in that borders Israel, mostly they are a group raised and brainwashed with hatred.  It is a hatred born out of 2 things; First is Islam, which teaches to hate and to kill all 'infidels' including the Jews who just happen to live next door.  Secondly,  is the great Islamic propaganda machine which has forever and continues to spread lies to the world about the conflicts in the region.  Most, including world leaders and the world media will not face the reality of the 'Palestinian Conflict.'    Ask yourself; why is this conflict any different than every other conflict in every country around the world where the Muslims kill and destroy on a regular basis?   The reality  simply is that there is no 'Palestinian Conflict.'   It is the same problem that exists every day in just about every horrid headline around the world; Islam.

One of the most recent atrocities tainted with 'Mohamed's Poison' ( here [2])  is the butchering of the Fogel Family in Israel (here [3]).

In the latest update to this horrific story, one of the subhuman Islamic butchers is shown 'celebrating' after his trial in which he was given five life sentences.  So this piece of shit will be housed and fed for some 50 odd years while decent people who would not harm a fly go homeless and starve.

During the horrific attack [4] the two young Fogel boys, aged four and eleven, were stabbed, one in the heart, while the family’s 3-month-old baby had its throat slashed. The Awads went to the parents bed, stabbed the father to death and then shot the mother after stabbing her multiple times as well.

The Palestinian teen and his cousin accomplice Amjad Awad, who still awaits his verdict, have shown no remorse for their slaughtering of the Fogel family at the Itmar settlement in March 2011.

In June, Awad told reporters of the Jerusalem Post that he does not regret his actions, and would do them again: “I’m proud of what I did and I’ll accept any punishment I get, even death, because I did it all for Palestine.”

Awad showed the same cold blooded self-affirmation when leaving court Tuesday, raising handcuffed wrists to motion the “V” sign for victory with his fingers, as photographed by Hagal Aharon of Ynet news: 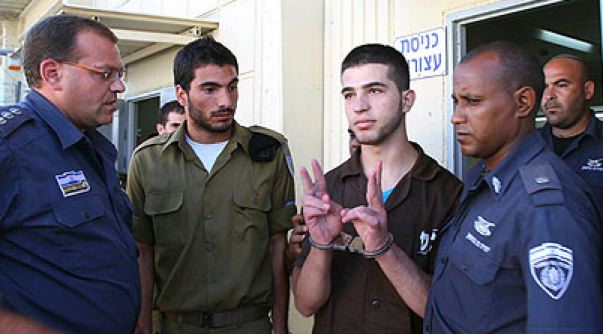 The Butchering of a family while they sleep = 'Victory' for Islam