Most posts here are written out of passion and then some out of disgust.  There are those though that I really hate to write because once again 'The Only Enemy' (here [1]) has been victorious which means we have lost another of mans great benefactors.

So little is written about those who represent the real American spirit and the genius that built this country.  We know the movie stars and the rock stars etc, but very few even recognize the names of those whose ingenious contributions effect us personally almost everyday.

Julius Blank, the man who helped found the groundbreaking chipmaker Fairchild Semiconductor Corporation, has passed away.  It can be said that just about everyone, everywhere, and on every day benefits from the life of this man.

So Thank You Mr. Blank for making all of our worlds better.  And please accept our gratitude every time we use anything produced from your great contribution. 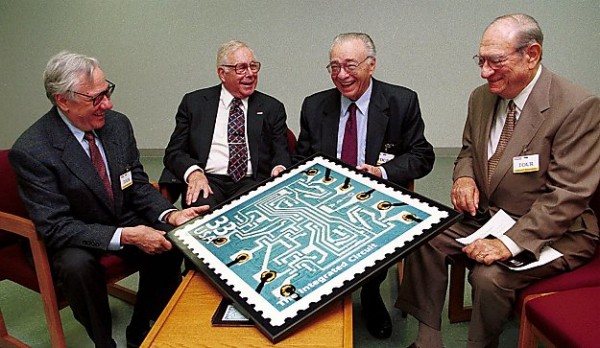 Somber news coming out of Palo Alto today, where Julius Blank, the man who helped found the groundbreaking chipmaker Fairchild Semiconductor Corporation, has passed away at the age of 86. The Manhattan-born Blank (pictured third from left, above) began his engineering career in 1952, when he joined AT&T's Western Electric plant in New Jersey. As a member of the engineering group at the plant, Blank helped create phone technology that allowed users to dial long-distance numbers without going through an operator. It was also at Western Electric where he met fellow engineer Eugene Kleiner. In 1956, Blank and Kleiner left AT&T to work at the lab of Nobel Prize-winning physicist William B. Shockley, but departed just one year later (amid to start Fairchild, alongside a group of six other computer scientists that included future Intel Corporation founders Robert Noyce and Gordon Moore. At their new labs, Blank and his peers developed an inexpensive method for manufacturing silicon chips, earning them $1.5 million in capital from a single investor. As the only two with any manufacturing experience, Blank and Kleiner were charged with bringing the dream to fruition — a task that required them to build the chips from scratch, beginning with the machinery for growing silicon crystals. They succeeded, of course, and in 1969, Blank left Fairchild to start Xicor, a tech firm that Intersil would later buy for $529 million, in 2004. But his legacy will forever be linked to those early days at Fairchild, where, as Blank described in a 2008 interview, he and his colleagues were able to experience the unique thrill of "building something from nothing." Julius Blank is survived by his two sons, Jeffrey and David, and two grandsons.