The things Muslims do are beyond the realm of reality to any thinking and feeling human being.  The latest from America's first (and last) Muslim President is to tell innocent Christians that are being slaughtered in their own homes and churches to 'be restrained'!

You read that right.  Instead of calling on a stop by the Egyptian military (who America finances) to brutalizing their own people, Obama only can tell the victims to just be passive as they kill you…

Let's put this in the right context:  here's a happy, peaceful newlywed Christian couple looking forward to their life together along with a photo of a few days later after the Muslims slaughtered the husband. 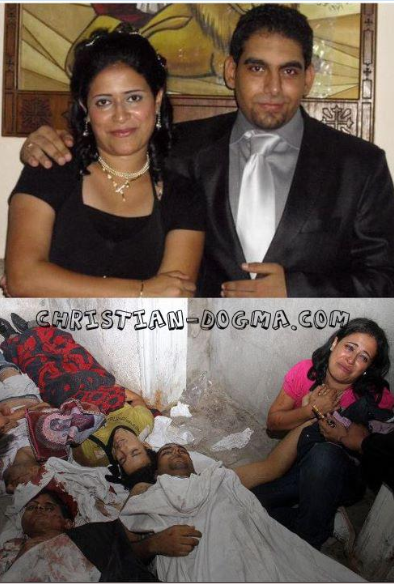 [1]And all Obama can say is to tell this woman to 'find restraint"?

Find this kind of hard to understand?  When you finally accept that Obama is a Muslim (HERE [2]) and you understand Islam and the Koran, it all becomes very clear.

To tell innocent Christians that they should restrain themselves as they are being killed by Islamists is right out of Mohamed's playbook.  As Pam Geller says: " Spoken like a true Mohammedan"

Bolton: "This will come as news to the Coptic Christians that they're supposed to exercise restraint. They're being attacked, they're the ones being victimized both by mobs of fellow Egyptian citizens who are Muslims and by the government."