The first thing that happens when I hear the name 'Obama' is I get nauseous.  The second thing is I again start to wonder why so often the 'bad guys' are 'blessed' with so much luck…

There is only one answer as to why Barack Hussein Obama has been able to ascend to the White House without being vetted and imprisoned; LUCK.  Here is another 'beyond belief' fact that just cries out the question

"How on earth was this man given a free pass by the media and the American people and allowed to lie and deceive his way to the Presidency?"

Is Obama guilty of felony identity theft?
The information for this video was taken from the lawsuit filed with the federal district court of Columbus GA in the matter of the Army major seeking proof of Obama's eligibility to serve as president. The private investigator hired by the attorney in the case discovered that Obama may have used up to 149 different addresses and 39 different social security numbers prior to becoming president. This video has nothing to do with whether Mr Obama is black, white, pink, yellow, purple or green. It has to do with his total refusal to provide not only satisfactory proof of fulfilling the Constitutional requirements of citizenship, but also not providing any college or university records, passports, Illinois legislative records, U.S.senate records, medical records…etc..etc.. We essentially know nothing about this man other than he is a "community organizer" and has been involved in Chicago politics and has associated with a laundry list of less than wholesome characters.

An intensive investigation has revealed the identity of the man whose Social Security number (SSN) is being used by President Obama: Jean Paul Ludwig, who was born in France in 1890, emigrated to the United States in 1924, and was assigned SSN 042-68-4425, Obama's current SSN, in or about March of 1957.
Ludwig lived most of his adult life in Connecticut. Because of that, his SSN begins with the digits 042, which are among only a select few reserved for Connecticut residents.Obama has never lived or worked in that state. Therefore, there is no reason on earth for his SSN to start with the digits 042. None whatsoever!
Now comes the best part! Ludwig spent the final months of his life in Hawaii, where he died. Conveniently, Obama's grandmother, Madelyn Payne Dunham, worked part-time in the Probate Office in the Honolulu Hawaii Courthouse, and therefore had access to the SSNs of deceased individuals. The Social Security Administration was never informed of Ludwig's death, and because he never received Social Security benefits, there were no benefits to stop and therefore, no questions were ever raised.
The suspicion, of course, is that Dunham, knowing her grandson was not a U.S. citizen, either because he was born in Kenya or became a citizen of Indonesia upon his adoption by Lolo Soetoro simply scoured the probate records until she found a deceased person who had not been receiving Social Security benefits, and selected Mr. Ludwig's Connecticut SSN for Obama.
Just wait until Trump gets past the birth certificate and onto the issue of Barry O's use of a stolen SSN. You will see leftist heads exploding, because they will have no way of defending Obama.
Although many Americans do not understand the meaning of the term "natural born" there are few who do not understand that if you are using someone else's SSN it is a clear indication of fraud.
Let's all start putting the word out to everybody on our mailing lists. 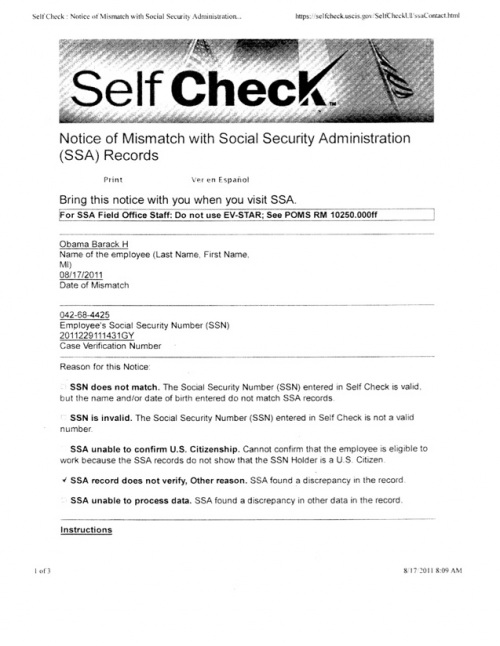 An attorney who has aggressively pursued the release of President Obama's Hawaii long-form, hospital-generated birth certificate [2] filed a complaint in federal court yesterday to force the release of Obama's Social Security files.