" It's those ugly facts that are to blame.  No wonder all liberals disregard them…" 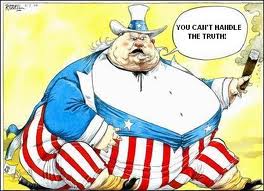 So Here's a little history lesson for anyone who cares about the facts.

The day the Democrats took over was not January 22, 2009, it was actually January 2, 2007, the day the Democrats took over the House of Representatives and the Senate, at the very start of the 110th Congress.
>>
>>     The Democratic Party controlled a majority in both chambers for the first time since the end of the 103rd Congress in 1995.
>>
>>     For those who are listening to the liberals propagating the fallacy that everything is "Bush's Fault", think about this:
>>     January 3rd, 2007, the day the Democrats took over the Senate and the Congress:
>>     The DOW Jones closed at 12,621.77
>>     The GDP for the previous quarter was 3.5%
>>     The Unemployment rate was 4.6%
>>     George Bush's Economic policies SET A RECORD of 52 STRAIGHT MONTHS of JOB CREATION!
>>     Remember that day…
>>     January 3rd, 2007 was the day that Barney Frank took over the House Financial Services Committee and Chris Dodd took over the Senate Banking Committee.
>>     The economic meltdown that happened 15 months later was in what part of the economy?
>>     BANKING AND FINANCIAL SERVICES!
>>     THANK YOU DEMOCRATS (especially Barney Frank ) for taking us from 13,000 DOW, 3.5 GDP and 4.6% Unemployment…to this CRISIS by (among MANY other things) dumping 5-6 TRILLION Dollars of toxic loans on the economy from YOUR Fannie Mae and Freddie Mac FIASCOS!
>>     (BTW: Bush asked Congress 17 TIMES to stop Fannie & Freddie -starting in 2001 because it was financially risky for the US economy). Barney Frank blocked it and called it a "Chicken Little Philosophy" (and the sky did fall!)
>>     And who took the THIRD highest pay-off from Fannie Mae AND Freddie Mac? – OBAMA
>>     And who fought against reform of Fannie and Freddie? – OBAMA and the Democrat Congress, especiallyBARNEY FRANK!!!!
>>     So when someone tries to blame Bush…
>>     REMEMBER JANUARY 3rd, 2007…. THE DAY THE DEMOCRATS TOOK OVER!"
>>     Bush may have been in the car but the Democrats were in charge of the gas pedal and steering wheel, while they were driving the economy into the ditch.
>>
>>     Budgets do not come from the White House.. They come from Congress, and the party that controlled Congress since January 2007 is the Democratic Party. Furthermore, the Democrats controlled the budget process for 2008 & 2009 as well as 2010 & 2011.
>>     In that first year, they had to contend with George Bush, which caused them to compromise on spending, when Bush, though belatedly, got tough on spending increases.
>>
>>     For 2009 though, Nancy Pelosi & Harry Reid bypassed George Bush entirely, passing continuing resolutions to keep government running and to increase government spending until Barack Obama could take office. At that time, they passed a massive omnibus spending bill to complete the 2009 budget.
>>
>>     And where was Barack Obama during this time?  He was a member of that very Congress that passed all of these massive spending bills, and he signed the omnibus bill as President to complete 2009.  Let's remember what the deficits looked like during that period:
>>     If the Democrats inherited any deficit, it was the 2007 deficit, the last of the Republican budgets.  That deficit was the lowest in five years, and the fourth straight decline in deficit spending.   After that, Democrats in Congress took control of spending, and that includes Barack Obama, who voted for the budgets.
>>
>>     If Obama inherited anything, he inherited it from himself.
>>     In a nutshell, what Obama is saying is "I inherited a deficit that I voted for, and then I voted to expand that deficit four-fold since January 20th."

" It's those ugly facts that are to blame.  No wonder all liberals disregard them…"