Like the name says, just drop this little baby anywhere, and you have a 24 hour camera hooked up to your own internet channel to see and monitor what you want, when you want.  It can be motion activated or on 24/7 and recorded on a DVR.   At the office, in the Swiss Alps. at your French hotel or anywhere you can hook up to the internet, your little 'eye in the sky' is always there. 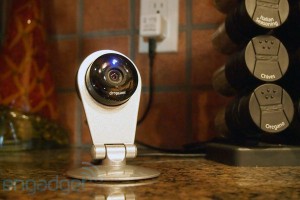 SAN FRANCISCO, CA, April 3, 2012 – Today, Dropcam announced that the award-winning Dropcam HD Wi-Fi Video Monitoring Camera is now shipping and that the pre-order period is over. Dropcam HD's automatic night vision, HD-quality video and always-on access make it effortless to use live and recorded video to check in on the kids, share moments of a new baby, keep an eye on a pet, or make sure your home is safe when you are away.

You can access the live video stream from your Dropcam HD camera anytime, anywhere – from a computer, iPhone, Android phone, iPad or Android tablet. When your camera detects motion or loud noises, you'll get an email and mobile push notification making it easy to stay up to date with what's happening at home when you're busy and on the go. For privacy, your video is encrypted with bank-level security, and streamed through the cloud, not your computer, so it's safe in case of any computer trouble or theft.

About the size of a yo-yo, and in décor-friendly monochromatic colors, this small camera is designed to fit ambiently into your home while it acts as your eyes and ears when you're not there. Dropcam HD plugs into a wall outlet, so it's always on and capturing live video whenever you need it – you'll never worry about running out of battery power.

Dropcam HD offers all of these features in one video monitoring camera:

· Easy 60-second setup. 1. Plug it in. 2. Select your Wi-Fi network. 3. Personalize it. Dropcam HD is online and ready to go in three automated, pain-free steps.

· Night vision. Reasons to keep an eye on what you care about don't stop when the sun goes down. Dropcam HD's superior night vision turns on automatically and allows you to see even the biggest living room clearly.

· DVR Recording. While real-time viewing of your video is free and always accessible, Dropcam offers 24/7 offsite cloud recording so you don't miss an important moment. Dropcam's DVR helps you go back in time to see what you didn't catch with real-time viewing. (Dropcam DVR is optional and starts at $9.95 per month.)

"The positive feedback we received at CES was very exciting. We saw more orders placed for Dropcam HD in the first week of its announcement than for all our previous camera models in 2011," said Greg Duffy, CEO and Co-Founder of Dropcam. "We are so proud of our team for developing the best home Wi-Fi video monitoring camera out there."

Dropcam HD is the only video monitoring camera in its class optimized to stream the highest-quality video stream across a standard home Wi-Fi network. Unlike a traditional IP camera, Dropcam HD is made to stream live, wide-angle, 720p video around the clock. Intelligent networking algorithms ensure Dropcam HD avoids throttling and bandwidth caps from your service provider.

Previously available only through pre-order, the Dropcam HD will now ship immediately. Dropcam HD ($149) is available on www.dropcam.com. Orders will be received within 5 – 7 business days via standard shipping.

The market for mobile video is set to grow exponentially in the next five years. In-Stat, a Scottsdale, Arizona-based researcher, recently estimated that by 2015, 86% of smartphone and tablet users will watch videos on their mobile devices. Additionally, Cisco predicts mobile video traffic will account for 71% of all mobile data by 2016.

Research shows video is becoming more and more pervasive on smartphones and Dropcam is at the center of this growing trend. People are not only streaming YouTube videos, but are looking to stream content that is more personal to them, such as accessing live video of their children and pets.