On this the 1085th day of Obama's mission to virtually dismantle the 'Great American Experiment', here's the latest on the man whose name is destined to replace Benedict Arnold in the annals of American history:

By Peter Wallsten and Scott Wilson, Published: May 9, 2012

President Obama announced Wednesday that he believes same-sex couples should be granted the right to marry, becoming the first U.S. president in history to fully embrace that level of civil rights for gays. 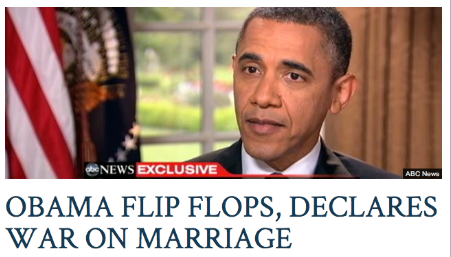 Obama once again disgraces his office and his country by endorsing perverted sex and 'marriage' against the will of God, Mother Nature and the American people

President Obama announced Wednesday that he believes sexually perverted couples should be granted legal rights for their perversions and AIDS inducing lifestyle habits.  His endorsement of queers 'marrying' each other shows his utter disdain for the will of the people and of the Judeo Christian foundation of America.   It also underline Obama's vision of the AIDS epidemic contributing to the jihad against Christian and Jewish infidels.

In his second term he hopes to legalize polygamy, incest and zoophilia.