The acceptance of the Muslim prom is another warning sign that Islam is taking over American culture and law.  They are being allowed to trod where no other religion can.  They are being given special treatment while Christians and Jews are being stripped of their rights and freedoms.  If left unchecked, it won’t be long before it will be officially known as the United Islamic States of America. – da Tagliare [1]

OK, 'Rod Serling’s America [2]' is meant to add humor to despicable and unbelievable situations.  But how funny is it going to be before we realize that this is not only NOT funny, but it is a matter of national survival.

Just about every week we read of how special privileges are bestowed on Islam in our country.  Can you imagine anything near this happening in a Muslim country?   Of course not.  How ironic is it that the Muslim countries will not permit any peaceful religions while the Christian nations welcome this 'religion' that endorses killing and mass murder in the name of their 'god.' 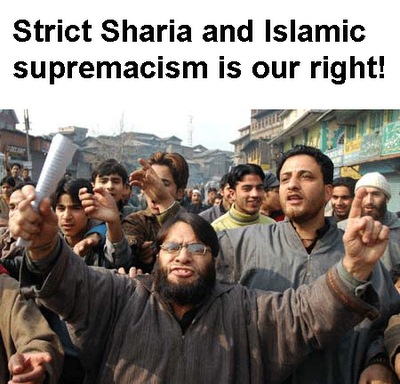 Of course 'ironic' is not the right word.  Neither is 'stupid' or 'gullible' the right word.  The only word that can realistically describe the 'open arms' policies of the Western countries is : Suicidal.

Here's the latest example Islam influence in our country:

Why is All Girl Muslim Prom Not a Violation of Separation of Church and State?

When was the last time you heard about a public high school holding a Baccalaureate Service for their Christian students who were graduating?

When was the last time you heard about a public school holding a Christmas (not holiday), Easter or Hanukkah program?

When was the last time you heard about a public school that did anything positive for Christian or Jewish students?

I bet your answer is, not for some time.  The ACLU and various atheist groups have successfully driven them out of the public school system.  Any show of religion (except atheism, humanism and secularism) is a violation of the separation of the church and state.