Received an email the other day.  It was titled 'I'm Tired" and was attributed to Bill Cosby.  Well it's not written by Cosby, it was written by Robert. A Hall [1], former Massachusetts state senator in 2009, but that's not important.

What is important is how it delineates the frustrations of the day, and that was in 2009.  It's definitely due for an update and I will be posting one soon.

I can agree with everything said here except that I'm not 'tired' – I'm 'SICK' of it.  'Tired's much to mild of a term for the unimaginable things that are taking place in what could be qualified as indeed a 'parallel universe' or as I like to call it; Rod Serling's America. [2] 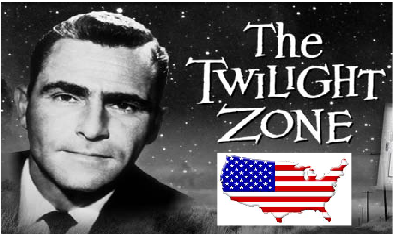 In the meantime my bet is that most Americans will agree with 99% of Mr. Halls' frustrations.

I'm tired of being told that I have to "spread the wealth" to people who  don't have my work ethic.

I'm tired of being told the government will take  the money I earned, by force if necessary, and give it to people too lazy to earn it.

I'm tired of being told that Islam is a "Religion of Peace," when every day I can read dozens of stories of Muslim men killing their sisters, wives and daughters for their family "honor"; of Muslims rioting over some slight offense; of Muslims murdering Christian and Jews because they aren't "believers"; of Muslims burning schools for girls; of Muslims stoning teenage rape victims to death for "adultery"; of Muslims mutilating the genitals of little girls; all in the name of Allah, because the Qur'an and Sharia law tells them to.

I'm tired of being told that out of "tolerance for other cultures" we must let Saudi Arabia and other Arab countries use our oil money to fund mosques and madrassa Islamic schools to preach hate in Australia , New Zealand ,UK, America and Canada , while no one from these countries are allowed to fund a church, synagogue or religious school in Saudi Arabia or any other Arab country to teach love and tolerance..

I'm tired of being told I must lower my living standard to fight global warming, which no one is allowed to debate.

I'm tired of being told that drug addicts have a disease, and I must help support and treat them, and pay for the damage they do. Did a giant germ rush out of a dark alley, grab them, and stuff white powder up their noses or stick a needle in their arm while they tried to fight it off?

I'm tired of hearing wealthy athletes, entertainers and politicians of all parties talking about innocent mistakes, stupid mistakes or youthful mistakes, when we all know they think their only mistake was getting caught.

I'm tired of people with a sense of entitlement, rich or poor.

I'm really tired of people who don't take responsibility for their lives and actions. I'm tired of hearing them blame the government, or discrimination or big-whatever for their problems.

I'm also tired and fed up with seeing young men and women in their teens and early 20's be-deck them selves in tattoos and face studs, thereby making themselves un-employable and claiming money from the Government.

Yes, I'm damn tired. But I'm also glad to be 83.. Because, mostly, I'm not going to have to see the world these people are making. I'm just sorry for my grandchildren and their children. Thank God I'm on the way out and not on the way in.