Muslim Woman Burnt Alive In Front of Her Daughters

Hello!  Civilized World!  What the hell are you waiting for?????   Fourteen hundred years, is that not enough time to realize what Islam is all about?   Death and destruction without any positive contribution to the world for 1400 years.   Daily atrocities; they don't ever let up.   It's what they do!  And they will not stop until YOU ARE DEAD:

The relentless, one-way direction of their efforts, and the persistent ignorance of people "negotiating" with them reminds me of a scene from the first terminator movie (The Terminator). In the scene, Kyle (the man who came back through time to protect Sarah Connor) is trying to explain to Sarah what the terminator is. She wasn't getting it. She didn't understand. She was actually refusing to get it.

Kyle finally grabs her wrists and yells at her: "Listen! That terminator is out there. It can't be bargained with, it can't be reasoned with, it doesn't feel pity or remorse or fear, and it absolutely WILL NOT STOP.  EVER!  Until you are  DEAD!" 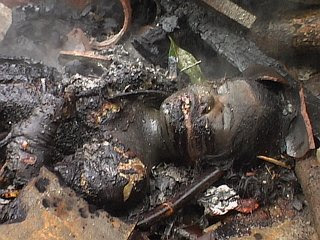 Woman burnt alive in front of her daughters

MALDA: The failure to give birth to a son and the inability to fulfill her husband and in-laws' demand for money cost a woman her life. She was burnt alive allegedly by her husband and in-laws in front of her minor daughters on Friday night. The victim, a resident of Khejurbona village, succumbed to her injuries on Saturday morning. The woman's mother has lodged a complaint but the accused have gone into hiding.

The victim, Jahiran Biwi, married Serajul Islam, a labourer, seven years back. They had two daughters – Tamanna, 5, and Sahamida, 2.

Jahiran's mother Aisanur Biwi said, "Since the birth of the younger daughter, my daughter was being tortured by her husband and in-laws. She was beaten up and abused for her failure to deliver a son." The torture stopped for a while after complaints were made against Serajul at Malda police station.

She was beaten with clubs by her brothers because she wore pants. She registered a case against them and her brother (a cop) shot her to death for not withdrawing the complaint. Her life was made a living hell by her devout Muslim family, which was adhering to the honor code of the Sharia. The murder was the final act.

And the Islamic government sanctions honor violence. One brother hasn't even been arrested.

She was beaten up for riding bike, wearing pants.

LAHORE: A woman was shot dead on July 20 by her brother, a police constable, for not withdrawing a case registered against him in April.

Tariq Shah, their elder brother of the deceased, said Najma, 35, part of the Sharqpur Inter College for Girls’ cricket team, used to wear pants and ride a motorcycle. He said he and his brothers did not approve of it. He said they had warned her several times but she did not stop.