If I hear one more person talk about a memorial I'm going to throw up!  How embarrassing is it to belong to a so called 'civilized society' where the people are more concerned with building memorials than ending the cult responsible for the killing of children.

You will never see a picture of one of these memorials on this site.  What you will see is the reality that everyone wants to forget and what they won't show you in the Brain Dead Media.  Here are 'our' children; the victims of Islam at a school 8 years ago: 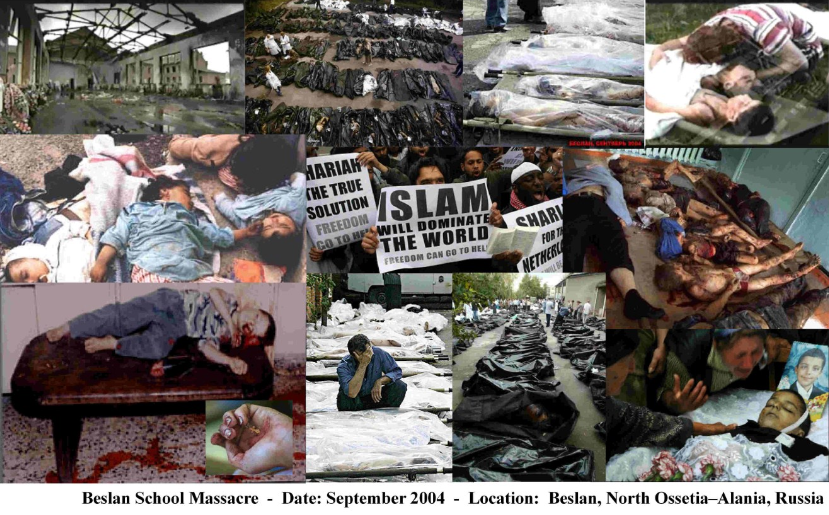 So the massacres continue 8 years after those children were raped and butchered at a Breslan school.   Eight years and what has the 'civilized' world done about it?  They keep giving Islam more privileges, allow them to build more mosques and keep funding these subhumans by sending them all that oil money to finance their 1400 year evil.

So please spare me the bullcrap about 'we won't forget' and 'we remember' and all the money spent on those 'beautiful memorials.'  With the advance of Islam since 9/11 the 'civilized' world has only shown how very uncivilized it is.  And if everyone were to be honest they would admit the unspeakable truth about the reality of their actions.  Only those whose loved ones have been butchered by Islam really care.  As for the rest of the scumbag politicians and the ignorant masses, they don't really give a damn about those poor children or anyone else who has been massacred by the cult of Islam.

As Islam goes about it's business of death and destruction, the 'civilized' world just throws a few dollars at some stone memorials.

There are no words to describe the soulless death cult known as Islam.  But there are many words that come to mind  when I think of the rest of this so called 'civilized' world;  Ignorant, Blind, Stupid, Mindless, Suicidal, Shameless, etc. etc etc. Take your pick because they all apply.

As for me, 'The Bottom Line' on this has remained constant since 9/12/2001:  There is only ONE memorial I ever want to see that pays homage to all the victims of Islam:

Years have passed since the bloody tragedy in Beslan. The siege of a school No. 1 in North Ossetia at the beginning of the scholastic year lasted for three days. People in the small town of Beslan and over the world had never seen such savagery. The tragedy played out within the walls of a school where over 1,000 people were held by militants from the volatile North Caucasus region without food and water and in constant fear.
The siege ended after three long days when Russian forces entered the building to save the hostages after hearing explosions ring out. Under heavy gunfire and risking their own lives, they bundled both women and children to safety.

The terrorist attack claimed 335 lives, including 186 children. To this day, people cannot forget the tragedy, especially those mothers who lost their children. Russia remembers the victims of the hostage crisis that unfolded in a school in the town of Beslan, in Southern Russia’s republic of North Ossetia.