I was not s Romney supporter.  Newt was and still is my number one choice [1].  But since Romney is now the man to end America's nightmare, I'm 100% for him.

Last night he gave an excellent speech at the GOP Convention.  One that frankly I didn't think he could deliver.  Between the speech and the passionate testimonies of his friends and neighbors, there was no doubt left.  Here is one hell of a compassionate and accomplished leader. 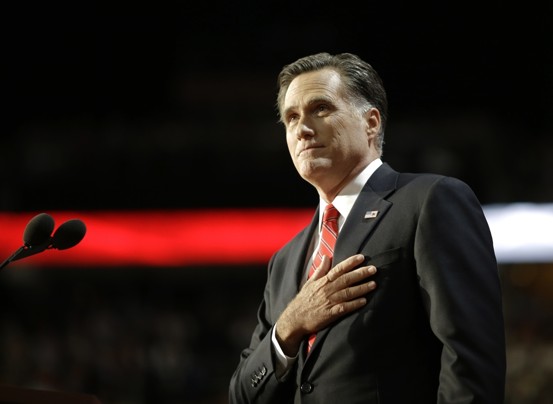 [2]Not only are his looks 'right from Hollywood casting', but this man's life represents just about all that we envision as the American dream.   Although he did graduate from law school he never practiced in the uncivilized world of lawyers.  He went out into the real world and earned his success and established unusual business credentials that make him just the man for the job at just the right time.

Here's a rundown on the man presented by a sarcastic email that pretty well makes the point.

A lot is being said in the media about Mitt Romney not being "likable" or that he doesn't "relate well" to people. Frankly, we struggled to understand why. So after much research, we have come up with a Top Ten List to explain this "unlikablility."

2. Been married to ONE woman his entire life, and has been faithful to her, including through her bouts with breast cancer and MS.

3. No scandals or skeletons in his closet. (How boring is that?)

6. Doesn't smoke or drink alcohol, and has never done drugs, not even in the counter-culture age when he went to college. Too square for today's America?

7. Represents an America of "yesterday", where people believed in God, went to Church, didn't screw around, worked hard, and became a SUCCESS!!!

8. Has a family of five great sons….and none of them have police records or are in drug rehab. But of course, they were raised by a stay-at-home mom, and that "choice" deserves America's scorn.

9. Oh yes…..he's a MORMON. We need to be very afraid of that very strange religion that teaches its members to be clean-living, patriotic, fiscally conservative, charitable, self-reliant, and honest.

10. And one more point…..pundits say because of his wealth, he can't relate to ordinary Americans. I guess that's because he made that money HIMSELF…..as opposed to marrying it or inheriting it from Dad. Apparently, he didn't understand that actually working at a job and earning your own money made you unrelatable to Americans.

My goodness, it's a strange world, isn't it?