"I saved my honor': Mother shoots and decapitates rapist who made her pregnant and then dumps his head in village square"

I love and respect all those who have a deep literal belief in the Bible.  There are exceptions to every rule, but these people are indeed 'the good guys' following the greatest philosophy and the foundation of civilized society.  I understand the 'revenge is mine sayeth the lord' admonition from the Bible.  I understand many of the Bible's admonitions but I don't take them literally.  OK I'm not the best Christian around.  I accept that.   As I told my preacher many times, I sincerely believe my duty is not to worship God 'The Father' but to love and protect His family here on earth.  And the better I do that, the more proud The Father will be of me.  That is my belief.

And the most challenging part of protecting this family is the never ending battle with evil.

We've all heard the quote from Edmund Burke:  "All that is necessary for the triumph of evil is that good men do nothing."  This has been the case since the beginning.   The sad fact here is that in all of history there has never been a time, as is now, wherein the 'good guys' have been so capable and well equipped to defeat evil.   Yet 'the good guys' are getting weaker and weaker in the face of evil.  Spearheading this weakness is the lawyer culture which professes that more laws will deter all this evil.  The truth and the reality is that all more laws do is enrich this parasitical lawyer class and embolden the evil to grow and spread like the deadly cancer it is.

Ms. Nevin Yildirim has stared evil in the face and she has eliminated it.  She has did what few have the courage to do and by doing so has made her contribution in protecting her family here on earth. 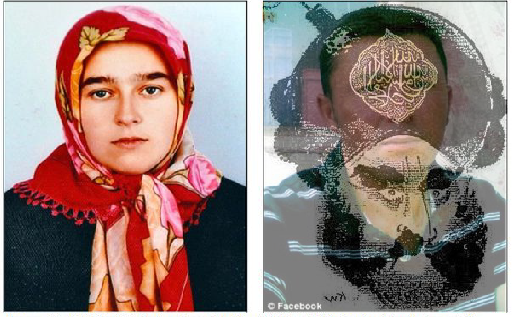 [1]Nevin Yildirim defied the teachings of the pedophile butcher Mohamed and killed her rapist and displayed her courage and honor for all to see… This woman is now an icon for all Muslim women.

"I saved my honor"

High praise from Atlas on this one (if what the rape victim says is true). What's good for the goose, I say. Horrible, yes. Necessary? What other choice do these women have? Had she been unmarried, she would have had to marry him or face jail. But circumstances dictated that she remain a victim, a sex slave for as long as this savage wanted to brutalize her.

Clearly she was driven to it. She had no recourse, and the sharia punishes her. Here is a brutal unintended consequence of the sharia. Savage begats savage. ....