It is no stretch to now say that America's most dangerous enemy is indeed The President of The United States!   Barack Hussein Obama has for the last 3 years shown us his interest in dismantling America and offering aid and comfort to it's enemies*.  (see: A Muslim President) [1]

He is no different today than he was prior to being elected.  He is a person born a Muslim, went to Muslim schools, madrassas, in his formative years, and later associated with and embraced all the anti- American ideologies which now as President he is trying to 'Change" America with. 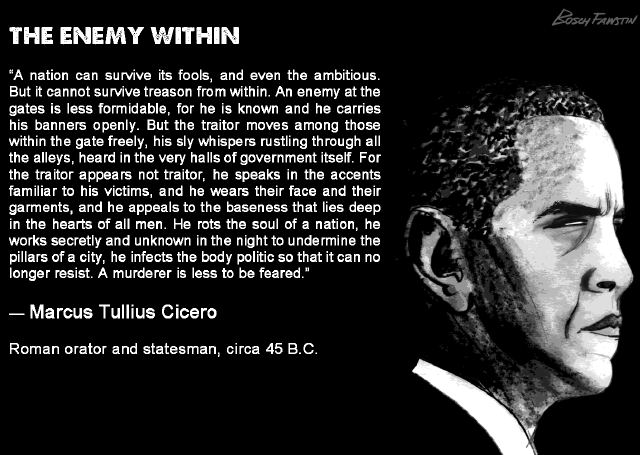 Posted By Bosch Fawstein on September 1, 2012

The latest story has my blood boiling more than usual when it comes to Obama and his Muslim allies. …

And here's the latest in this long list of treasonous actions from the Obama administration.

…a more significant abandonment of Israel came when the Pentagon decided to decrease drastically its participation in a joint military exercise with the Jewish state – while pursuing military exercises with the new Muslim Brotherhood regime in Egypt.

At the same time, the Chairman of the Joint Chiefs of Staff, Martin Dempsey, even suggested that an Israeli attack on Iranian nuclear sites would be a crime, and that the U.S. would have no part of it, when he said: “I don’t want to be complicit if they choose to do it.”