‘The human capacity to deny evil is almost limitless’

This lethal human characteristic is more prevalent today than ever before in history.  And there can be no better proof than the sad and dangerous reality that almost the entire world population believes that Islam is a ‘religion’.

‘Never have so many been willing to deny so much reality!’

Despite Islam’s 1400 year history of death and destruction; 270 million people killed in the name of ‘Allah.’  Despite the well documented history of Mohamed, the founder of Islam and idol of all Muslims, who was a deranged pedophile and warlord. 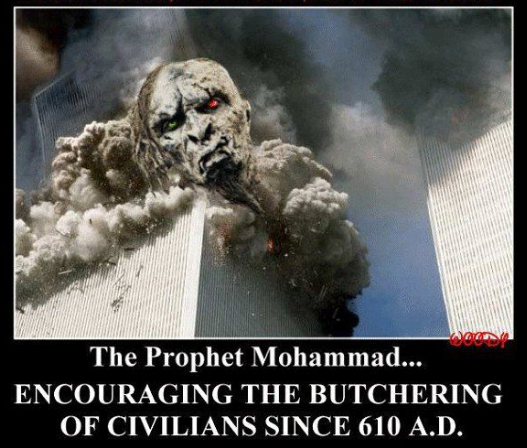 [2]Despite the last 70 years of Muslim violence and bloodshed in the Middle East aimed at eliminating an entire nation and it’s people.  Despite 9/11 and the twenty thousand that have been killed since then all over the world in the name of Islam.  Despite that the Islamic ‘preachers’ daily issue ‘fatwas’ that call for the death and annihilation of America and Israel and all ‘infidels.’  Despite all of this and more, most still consider Islam a religion

There can be no debate about this.  The history and the facts are there.  Indeed, all anyone would have to do is read down the list at ‘This is Islam [3].’   No need to even read the articles.  The headlines alone shout out the whole evil story.  Islam is a death cult camouflaged in a cloak of religion that has brainwashed it’s followers for over 14 centuries.  And the only reason that it still exists is because the civilized world has been and still is in denial. 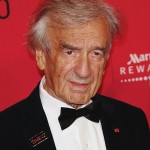 [4]In Elie Wiesel [4]’s book “Night” he described how, as the Holocaust got underway, people all over Europe were reluctant to believe that something so awful was happening. Most people didn’t want to believe that man was capable of such inhumanity to man. The initial reports of what was happening in the ghettoes and in the camps were so horrific that most simply chose not to believe them. Moreover, most people were unwilling to accept that Europeans, civilized, cultured and intelligent, were complicit in allowing this to happen in the twentieth century.
Sadly, those who were unwilling to believe the truth were often the first to be deported to the ghettoes or the camps. Elie describes how the Jewish people of the villages were mostly well educated and rational adults – yet, the very idea of government-sanctioned mass murder was beyond their ability to comprehend, much less accept.

The future of Europe was envisioned by the Nazis and so they had to be defeated.  The future of the world was envisioned by the Communists and so they had to be defeated.  Fortunately the defeat of the Soviet Union was achieved without a major war.   And so it can be with Islam.  Islam’s strength comes only from that which we, the civilized world, provide it with.  And the most powerful weapon it has and the one which has advanced it’s demonic ideology through the ages is the cloak of religion.  Islam has been brilliant in using this guise to deceive the free world into accepting it as a ‘partner’ in life instead of our enemy. 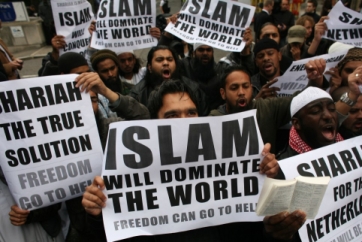 [5]
Although almost daily it broadcasts that it will destroy us and will dominate the world, our ‘denial’ continues to let this enemy advance.  And by taking refuge in this denial, we are welcoming the enemy into our camp, insuring our defeat and the end of civilized society.
“So what do you do if you were President”? asks a friend after explaining this suicidal denial that enables Islam to spread it’s cancer.  Well the first thing obviously is to wake up from this state of denial and face the reality that we are in a war for civilization [6].
Like Nazism, Fascism and Communism, Islam is an ideology that flies in the face of freedom and is abhorrent to the common decency of man.

The first thing The President of The United States needs to do is to call a news conference and state unequivocally that The United States no longer recognizes Islam as a religion.  And that since most of the organizations on the US State Department’s [7]list of terrorist organizations are factions of Islam, all will be removed and replaced by the parent organization which of course is Islam.  Also, until the threat of Islam is removed globally, any followers of this ideology will be denied entrance to the United States and all followers within our country will have to sign an oath of allegiance to America and refute the teachings of Islam, Mohamed and Sharia law.  The preaching and or proselytizing of Islam will be punishable under The Patriot Act [8] and or under 18 USC Chapter 115. [9]

Sounds pretty drastic to most.  So did the idea of dropping the atomic bomb on Japan.  But the decision was made because it was war and it would save the lives of over 100,000 American soldiers.
This time the decision needs to be made in order to save civilization itself.  This time we don’t need to devastate a city and kill thousands of innocents.  We don’t need to drop a bomb to eliminate this enemy.
All we need to do is to recognize him…
Be Sociable, Share!