Lawyer/Secretary of State Hillary Clinton is so adamant about helping the Syrian 'rebels' overthrow Bashir Assad that she's asking for another 45 million of OUR tax dollars to help them.  of course [1]Clinton like most lawyers [1], (does the name Obama come to mind?), either live in a cave or are just so damn out of touch with reality that their few if any brain cells survived law school…

I mean how much will it takes before these brain dead and narcissistic people like Hillary Clinton get it?  Iran, Egypt, Libya.  How much writing on the wall is needed?  The answer of course is that they are lawyers by trade and so they will never think or react or make decisions like real leaders would do.  (SEE  GLOOG) [2]

In fact forget about all the 'writing on the wall.'  No need to read.  Just watch the videos they send to us 'infidels' almost on a daily basis.  Here's the latest form one of the Islamic subhuman 'rebels' that Hillary wants to send OUR MONEY to:

“We started our holy war here and won’t finish until this (Jihadist Banner) will be raised on top of the White House. 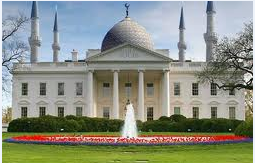 Posted by Tony Cartalucci on September 29, 2012

US Secretary of State Hillary Clinton announced that the US would be providing an additional $45 million in “non-lethal aid” to the “opposition” in Syria, reported the Associated Press. The Western press chose their words carefully, ensuring that the term “civilian opposition” was repeatedly used to describe the armed terrorist forces attempting to violently overthrow the Syrian government…