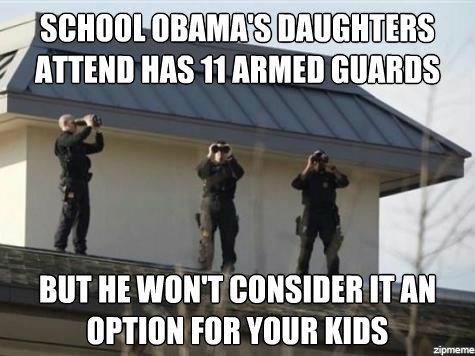 …   Let’s take a look at the school where Obama’s two daughters attend.  Sidwell Friends School [3] in Washington DC already uses 11 armed security guards to protect their students.  Rumor has it that they are trying to hire a new police officer to add to their security staff.

If armed security at schools is so repulsive to the liberals, then why are there so many armed guards at Obama’s school?  In addition to Obama’s kids, NBC’s David Gregory also sends his kids to Sidwell where he knows they are protected by armed security.  Gregory, a TV commentator and news personality is an outspoken advocate for gun control.  He recently went on a tirade on Meet the Press where he attacked the NRA and their suggestion to place armed guards at schools.

This is a prime example of the hypocrisy of the Obama administration anti-gun liberals.  What’s okay for their families is not okay for your family and your kids.  Your kids are more expendable than theirs,