The following is an excellent rundown on the obvious differences between Islam and the rest of the world.  The only mistake is when he suggests this;

The West is almost as in love with improving the world, as the Muslim world is with conquering it. These two contradictory impulses, the missionary and the warrior, come together in the Clash of Civilizations.

The error is in describing the Muslim world as a 'civilization.'  In understanding the principle  meaning and definition of 'civilization', anyone who is familiar with the history, tenants and goals of Islam could never apply this description.

The words 'civilization' and 'religion' only serve to give cover to the reality.  More accurate would be to describe Islam as a cult (1) [1]  or an ideology (2) [2].   In The War for Civilization [3], it is put forth that we, The West, are fighting for the future of civilization against Islam, who makes no bones about their mission to submit all the world to Islam and their barbaric ideology. 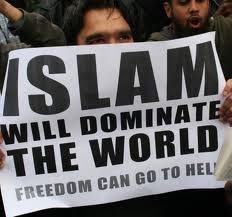 Never the less, the most important point here is that MOST of the civilized world DOES NOT UNDERSTAND Islam and in their ignorance supports the propaganda of this death cult which has survived for 1400 years under the cloak of 'religion.'

'Beware of sheep in wolves clothing'

Saving One Billion People From Themselves

The West is almost as in love with improving the world, as the Muslim world is with conquering it. These two contradictory impulses, the missionary and the warrior, come together in the Clash of Civilizations.

The Muslim world has two approaches to the West; underhanded deceit and outright terror. …

Westerners worry a great deal over who runs the Muslim world. Muslims do not care very much who runs Western countries. …

Muslims are religiously and culturally antagonistic to the West. Westerners focus their animus on Muslim leaders, on a Saddam, a Gaddafi or an Arafat– not recognizing that the hostility comes not from the leaders, but from the people. …

We are not so wise and so perfect that we can claim to know how to save 1 billion people from themselves. Right now we are having a good deal of trouble saving us from ourselves and we cannot be expected to shoulder the burden of reforming the Muslim world as well. …

If the Muslim world has raised up a wall of sand against freedom, tolerance and the recognition of our common humanity– then it is best for their sake and ours that they remain on their side of that wall of sand.  …

If they refuse to coexist with us, either locally or globally, then that is their choice. They may have their paradise of hefty-bagged women, towering mosques and cowering infidels– so long as their bigotry and oppression remains on their side of the wall of sand. When they breach that wall, then they have to live by our laws, not theirs. If there is no room for our laws in their lands, then there is no room for their laws in ours.  …

The West condescends to Muslims, and Muslims condescend to the West. Both reassure the other that everything is fine. But while the West's condescension is based on wishful thinking, that of the Muslim world is based on progressive conquest. If diplomacy is the art of saying, 'Nice Doggie' while looking for a stick, then the West isn't looking for the stick, and the Muslim is.  …

The West's missionary impulse toward the Muslim world is not only misplaced, it is positively dangerous.  …

Western codes are black and white, Muslim codes combine all shades into one. When the Muslim world is confused or in doubt, it resolves these feelings with violence. The West does not resolve them at all. While the West broods, the Muslim world slits throats. The problems of the Clash of Civilization cannot be postponed much longer. They are our problem. We cannot save 1 billion people from themselves, but we can save ourselves from them.