Anyone out there getting a little sick of naming all the 'extremists' that have 'hijacked the Muslim religion' ??

All of these groups are made up of those who follow the Koran and emulate Mohamed.  The remaining Muslims also follow the same books & teachings but are silent;  'Silence means consent.'

So in the interest of clarity and of course 'the bottom line', this author does not invoke individual labels for the multitude of Islamic butchers.  Unlike most of the ignorant West and indeed even my MINO (Muslim In Name Only) friends [2], I have read and understand the meaning of the Koran and the Hadith.  The only conclusion after this is simply that it is ISLAM, not any particular 'subdivision', that is and has been the motivational force behind all of the atrocities today and since Mohamed founded this cult some 1400 years ago.

While U.S. leaders continue pushing for war against the Syrian government, today “Al-Qaeda-linked rebels,” reports AP [5], “launched an assault on a regime-held Christian mountain village in the densely populated west of Syria and new clashes erupted near the capital, Damascus, on Wednesday… In the attack on the village of Maaloula, rebels Islamists commandeered a mountaintop hotel and nearby caves and shelled the community below, said a nun, speaking by phone from a convent in the village. She spoke on condition of anonymity for fear of reprisals.”

Arabic news agency Al Hadath gives more information concerning this latest terror attack on Syria’s Christians, specifically how the Islamists al-Qaeda linked rebels “terrorized the Christians, threatening to be avenged on them after the triumph of the revolution.” 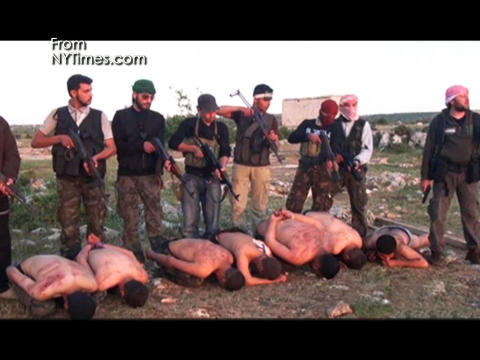 Syrian Islamists execute Christians and the government soldiers that are protecting them.

Thus al-Qaeda Muslim terrorists eagerly await U.S. assistance against the Syrian government, so they can subjugate if not slaughter Syria’s Christians, secularists, and non-Muslims — even as the Obama administration tries to justify war on Syria by absurdly evoking the “human rights” of Syrians on the one hand, and lying about al-Qaeda’s Islamists presence in Syria on the other. 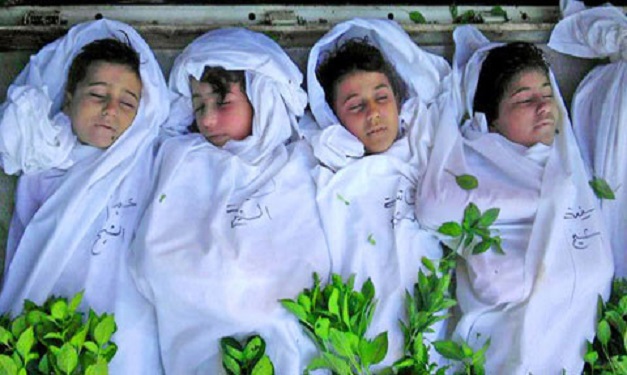 Members of the Free Syrian Army reportedly attacked the Christian-dominated al-Duvair village in Reef on the outskirts of Homs on Monday, where they massacred its citizens, including women and children, before the Syrian Army interfered.  read more.. [8].