If there was any doubt, any doubt at all, that the US President is an amateur, unfit for the high office he holds, then this Syrian fiasco, this disaster of arrogant bungling, ought to be proof enough.  – J. D. Longstreet [1]

Yes indeed, this guy is the most incompetent man to ever represent the American people.  Yet at the same time he just may be the most competent ‘President’ ever to hold the office! 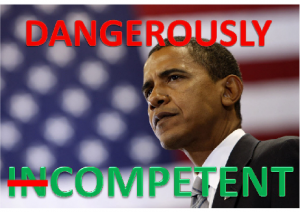 [2]And therein lies the answer to the 5 year old question about ‘Why’ his policies and his administration has been such a ‘failure.’  The answer is obvious given his record; he does not represent the American people.  Barack Obama is doing exactly what he told us he would do; ‘fundamentally transform The United States of America.’

Now who the hell in their right mind would want to ‘fundamentally change’ a winning formula?  (OK, let’s leave Coca Cola out of this…)  Barack Hussein Obama is a man that wants the ‘formula’ to stop winning and take a back seat to the ‘competition’  or in this case other countries or more specifically in this case: ideologies. (see The Muslim President [3])  .

And here’s a tip while were at it:

If you would like to know what policy or which direction Obama will always lean towards, just pick the one that is worse for America.   The evidence is overwhelming [4].

Should the laundry list of Obama failures be accidental, it only proves Obama’s incompetence and justifies impeachment based on constitutional grounds.  More troubling is that perhaps the Obama failures are designed to undo the Constitution and lead to America’s demise …  read more [5]

As usual, J.D. Longstreet makes a convincing case about Obama’s incompetence and he’s absolutely right; that is if you are expecting The President of The United States to Love his country…

Obama Has Been Rolled!

…  Mr. Obama ought to resign in humiliation.  The nation’s honor demands it.

But of course, he won’t.  He’ll do what people like him always do — blame someone else and continue dancing along the edge of disaster with full knowledge that he is king and nothing bad can ever go wrong because he IS king.

The import and the impact of what just happened in history will not strike the people, or the government, of the US for a while yet.  But it will.  Count on it.  Unfortunately, by then it will be too late to plan for the inevitable.

If there was any doubt, any doubt at all, that the US President is an amateur, unfit for the high office he holds, then this Syrian fiasco, this disaster of arrogant bungling, ought to be proof enough.

A REAL President would call his political party leaders in and tell them to prepare for his imminent resignation.  He would then address the nation, admitting his gross mistake and error(s) in judgment, announce his resignation — effective immediately — and pack his bags and leave Washington.

But that would take a real man.  A man with character, a man with honor, a man who genuinely loves his country more than himself.

Sorry, but I just don’t see it happening with Mr. Obama. …