It’s so obvious.  It’s so simple.  Yet that’s not the way the lawyer mentality views anything because they make their fortunes doing  just the opposite.  Be it in a simple contract dispute or the Constitution of the United States.  All bare subject to an unorthodox review and interpretation by those who benefit by confusion and lengthy battles in the legislatures and the courtrooms.

The Internal Revenue is the poster child for this.  It is so over bloated and confusing that it is easily manipulated and edited by the lawyers/politicians to their clients satisfaction, as long as the payoffs are right…  And in the meantime the common citizen has to face the constant threat of losing his property to this extortion legalized by the 16th Amendment. 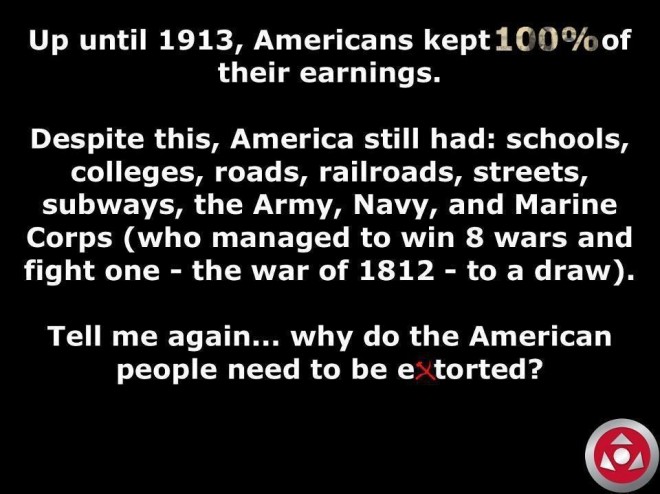 Proposal would specifically take away authority to tax income

It happens rarely. A taxpayer challenging the constitutional basis for the income tax wins  in court, defeating the Internal Revenue Service, such as in the case brought by the late Tom Cryer, who was acquitted on a charge of failing to pay $73,000 to the government.

Now three members of Congress want to make that result the norm through a bill that  would repeal the 16th Amendment, effectively canceling federal income taxes.

Rep. Jim Bridenstine, R-Okla., argues the Fourth Amendment to the U.S. Constitution guarantees the “right of people to be secure in their persons, houses, papers, and effects, against unreasonable searches and seizures.”

The 16th Amendment, he contends, effectively negates the Fourth Amendment.

“The 16th Amendment should be repealed, and the IRS should be eliminated,” he declared.

The following is WND’s interview with Bridenstine: