WARNING:  This subject is about as gross as it gets.

Sharia Law in Britain – Only Whores Need A Clitoris 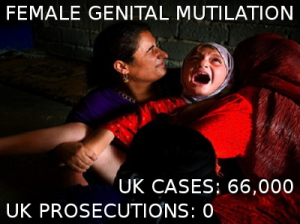 Once again we look at a practice of Islam and once again the only thought that comes to mind is ‘subhuman.’   This death cult doesn’t even rate the label neanderthals or barbaric.  They have gone far beyond those since Mohamed started this cancer 1400 years ago.

As if all the other evidence isn’t enough, if you have the stomach, watch this very disturbing video and you will agree; Shame on anyone and everyone who still calls this diarrhea of civilization a ‘religion.’

Posted on November 19,2013 by banislamofficial

Women: Do You Have a Clitoris?
Well… If you live in Britain.. you may not for long.
Why?
Because Muslim Men do not believe you should have one.
There is a Movement in Britain now by Islamic Muslim Men to force ALL WOMEN in Britain to undergo MANDATORY REMOVAL of the female genitalia. (Clitorechtomy)
footnote: This movement has already begun in the United States, as well.
* This will not ONLY APPLY to muslim women… This will apply to ALL WOMEN !
This is a pamphlet put out by the supporters of Sharia Law (Islamic Law) in Britain which states that…
“…women have no need for their genitalia…” “…unless you are a whore”  …