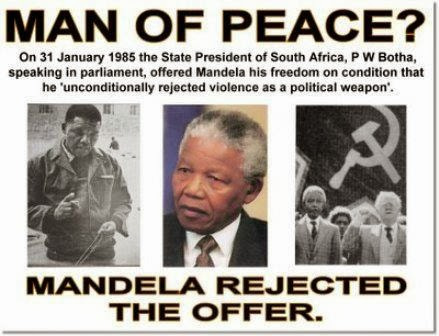 The whole world, pretty much, is mourning for Nelson Mandela today.

He was not Martin Luther King Jr. He was not Mahatma Gandhi. And he was certainly not George Washington, as Barack Obama claimed. 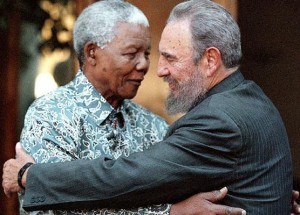 [2]He was a committed member of the South African Communist Party. He was a leader of the revolutionary African National Congress, which he helped to radicalize into an organization sworn to armed, violent attacks.

Maybe you say: “But Farah, he was fighting against the evil of Apartheid!”

Yes, that is true. Apartheid was inarguably an evil and unjustifiable system. But so is the system Mandela’s revolution brought about – one in which anti-white racism is so strong today that a prominent genocide watchdog group has labeled the current situation a “precursor” to the deliberate, systematic elimination of the race.

In other words, the world has been sold a bill of goods about Mandela. He wasn’t the saintly character portrayed by Morgan Freeman. He wasn’t someone fighting for racial equality. He was the leader of a violent, Communist revolution that has nearly succeeded in all of its grisly horror.

But don’t believe me.   I’ve never been to South Africa – not during Apartheid and not after.

Instead, listen to Sonia Hruska. She was an early supporter of Mandela and worked in his administration.   read more…. [3]

“In 1996 Mandela promoted and signed into law the ‘Choice on Termination of Pregnancy Bill’ that, according to the New York Times, ‘replaced one of the world’s toughest abortion laws with one of the most liberal.’”  read more… [4]

The real Mandela in his own words

I noticed over the weekend that lists of quotes from Nelson Mandela had gone viral on the Internet.

None of the lists I saw included any of these – which say more about the man and the myth than you could have learned by reading all the reports in the international establishment press.