This is really sad.  At 63 years old I’m about to tell you about what a deal I got at McDonald’s instead of about the great deal I got on a new Rolls Royce…

Anyway, it’s been well over 10 years since I sat foot in a McDonald’s.  Bottom line for me is that there burgers are the worst.  They should spend more time improving their burger than on new and unusual items that they invest so much in and that will bring few people through the doors.

So last week a new McDonald’s opened up near us.  Of course the kids were anxious to go even though they’re not fans.  It’s new and has to be checked out.

Took my son there on their Grand Opening Day and were pleasantly surprised that not only did we get a parking spot, but there was no wait to place our order.   But the real deal was when we ordered using the special coupons they had for their opening.  Here’s the receipt.

[1]That’s right – 4 Big Macs, 3 french fries and 2 apple pies for $1.06!   My son still can’t believe it.  I told him that we were back in 1955 for the day!   And then when we were finishing, an employee brought over a chocolate shake and asked if we wanted it!   Of course we downed the shake and left the store filled up and with two big smiles.

But the real reason that I am posting this is because it was a precious time with one of my greatest achievements, my son. 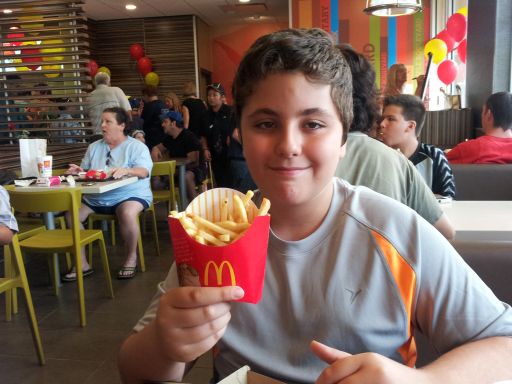 So thanks for the memory McDonald’s.  We’ll be back.  But I’m still not going to order the burger .

Chicken & Fish Filet only.  And of course McDonald’s fries.