By now most know that Barrack Obama is a pathological liar.  A poster child for narcissism.  Most also have come to understand that he is a Muslim because actions speak louder than words [1].

Of course he’s not a Muslim ‘extremist’ because the truth is that there are NO Muslim extremists, only Muslims:
“There is no moderate or immoderate Islam. Islam is Islam and that’s it.” – Turkish Prime Minister Erdo?an

Obama is a Muslim and like all Muslims he is compelled by Islamic doctrine to lie for the advancement of Islam.

It’s called ‘Taqiyya’ : There are two forms of lying to non-believers that are permitted under certain circumstances, taqiyya and kitman.  These circumstances are typically those that advance the cause Islam – in some cases by gaining the trust of non-believers in order to draw out their vulnerability and defeat them.   read references… [2]

[3]
So Obama has the bully pulpit to advance Islam and he uses it whenever he can; even on Christianity’s most sacred holiday Easter.

Posted by Pamela Geller on April 21, 2014 – It’s Easter. Does Obama address the mass persecution, oppression and slaughter of Christians across the Muslim world? No, instead he proselytize for Islam. On Easter. It’s sick. 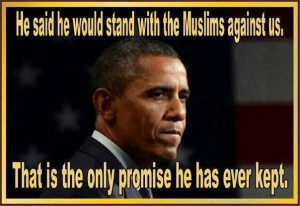 [4]Obama said this time of year is a good time to remember the “common thread of humanity that connects us all – not just Christians and Jews, but Muslims and Hindus and Sikhs – is our shared commitment to love our neighbors as we love ourselves.”

Here’s what the Koran has to say about loving your neighbor.

Qur’an (5:51) – “O you who believe! do not take the Jews and the Christians for friends; they are friends of each other; and whoever amongst you takes them for a friend, then surely he is one of them; surely Allah does not guide the unjust people.”

Lest we forget the interview Obama conducted with the NY Times. Nicholas wrote:

NY Times “I was a little Jakarta street kid,” he said in a wide-ranging interview in his office […]. He once got in trouble for making faces during Koran study classes in his elementary school…

Mr. Obama recalled the opening lines of the Arabic call to prayer, reciting them with a first-rate accent. In a remark that seemed delightfully uncalculated (it’ll give Alabama voters heart attacks), Mr. Obama described the call to prayer as “one of the prettiest sounds on Earth at sunset.”

Quotes From The Muslim President [1]