Ronald Reagan once quipped, “I have wondered at times what the Ten Commandments would have looked like if Moses had run them through the U.S. Congress.”

If the Gipper had lived another couple decades, he might’ve found out. – J. Matt Barber

TITLE NOTE:  Here at The Bottom Line Guy we try to call ‘a spade a spade.’  Instead of adopting the propaganda of those who’s agenda is against most American values and traditions, we will call them what they are and what represent by their actions.   Thus the ‘Antis’ is short for Anti – Americans, which is exactly what liberals and Progressives truly represent.

How Liberalism Violates the Ten Commandments

Posted on May 19,2014 by J. Matt Barber – Still, there is a difference between individual sins and a philosophical worldview that embraces those sins as a matter of course. Modern liberalism – “progressivism,” leftism, secularism, pick your poison – is built upon, by and for sin itself. Liberalism’s entire fabric is constructed by precept planks that are soaked through and stained by man’s arrogant rebellion against our Creator God.

In sum, liberalism is folly. It represents man’s futile attempt to disorder God’s natural order. It’s the unholy brainchild of God’s very first enemy, given by that enemy to God’s favored creation, us, with the sole purpose of destroying that creation. 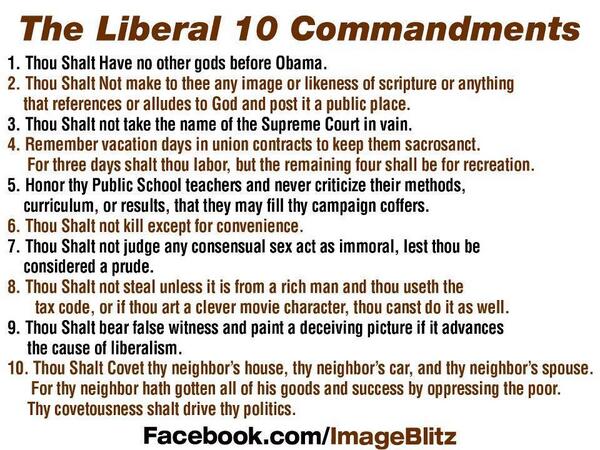 Volumes could be penned on the myriad ways in which the central tenets of liberalism violate each of the Ten Commandments (Ex. 20:1-17).  The following is a much truncated analysis:

1. Thou Shalt Have No Gods Before Me.
At worst, liberalism denies the very existence of God in the forms of atheism and secularism, while, at best, it adopts that wonderfully “inclusive” blasphemy called religious pluralism. Pluralism presumes to give the false gods of false religions equal footing and denies Christ as He defined Himself: “I am the way and the truth and the life. No one comes to the Father except through me” (John 14:6). Liberal “Christianity” falls under this category. It’s pluralism with a Christian stamp.
Secular humanism, liberalism’s prevailing false religion, denies God altogether and crowns man as king over himself and the measure of all things. “Eat, drink and be merry, for tomorrow we die.”

2. Thou Shalt Not Make Graven Images. …